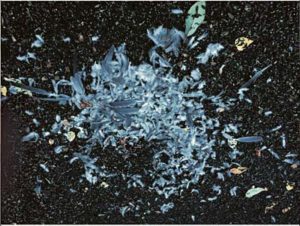 Each day, when I get home from the store, I usually make a beeline for the window looking out onto the bird feeding area in my backyard. When I got home on Tuesday of this week, what immediately caught my eye was a large pile of feathers – most undoubtedly the work of a hawk.

I went outside to take a closer look, and, judging by the feathers making up the pile, I surmised a mourning dove met its demise, most likely at the hands – or should I say – the talons of a Cooper’s hawk.

There are three species of hawks in North America referred to as accipiters. All three accipiter species are found in the Prescott area: Goshawk, Cooper’s and sharp-shinned. One characteristic shared by all three accipiters is their speed and maneuverability.

Goshawks are found in high elevation pine forests surrounding Prescott. Cooper’s are common year-round residents and are frequently seen in urban settings, especially in yards where there are bird feeders. Sharp-shinned hawks typically arrive in the fall and leave in the spring, and are not as abundant as its larger cousin, the Cooper’s hawk.

Anyone living is the quad-city area who has a hawk preying on birds at his feeders is more than likely encountering either a Cooper’s or a sharp-shinned hawk. The plumage for each of these species is very similar, and for most casual backyard birders it is challenging to tell the two apart. In adult plumage, the wings and back are a slate blue-gray color, the tail has a barred pattern of alternating light and dark bands and the breast is a golden-orange color. Juvenile plumage is brown on the wings and back, with white flecks. The tail is also barred, and the breast is predominately white with brown vertical streaking.

One helpful identification tip is the difference in size between the two species. The Sibley Guide to Birds lists the length of a sharp-shinned hawk as only 11 inches. Cooper’s hawks are listed as being 16.5 inches long. When you see a hawk in your yard, a quick rule of thumb is to compare the length of the hawk you are seeing to that of a western scrub-jay. Scrub-jays are listed as being 11.5 inches in length. Small, jay-sized accipiters will typically be sharp-shinned hawks, and larger accipiters will usually be Cooper’s hawks.

Having said this, it is important to realize that in both species, females are significantly larger than males. This means a large female sharp-shinned hawk might approach the size of a small male Cooper’s hawk. Use caution when identifying and reference a field guide for other distinguishing characteristics.

Hunting strategies employed by accipiters include flying low and fast into a yard, in effort to use the element of surprise. It is not uncommon for unsuspecting birds, feeding at a feeder, to fly into a window and knock themselves out when hawks come swooping into the yard.

Another hunting strategy involves diving head-first into trees or bushes where small song birds are seeking protection from birds of prey. Songbirds have a better chance of survival if they stay concealed in vegetation. If they leave the safety of the bush, the hawk will use its speed and agility to overtake its prey in flight.