Coming to the rescue of an injured hawk 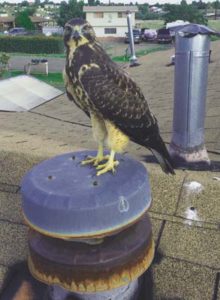 This past Friday, a homeowner in Prescott Valley found a large hawk in her yard with a wing injury-possibly a gunshot wound. The hawk was actively moving around inside her yard, but was unable to fly. Using a small pine tree adjacent to her home, the hawk worked its way up through the branches and got onto the roof of her house.

The homeowner was desperate to get some medical help for the bird, but each of the agencies she contacted said she needed to capture the bird before they would come out to pick it up.

Climbing up on the roof was not an option for the homeowner, so she reached out to a member of the Prescott Audubon Society, who in turned reached out to me.

I called the homeowner and we decided since it was fairly late at night, there wasn’t much we could do until the next morning. My initial concern was whether the hawk would even make it through the night.

The next morning, at six o’clock, the homeowner called and gave me an update. The hawk was alive and still on her roof, so I immediately drove out to her place to assess the situation. I had been told that it was a red-tailed hawk, but when I arrived I saw that there were actually two juvenile Swainson’s hawks.

Both hawks were remarkably tame-I suspect they had not yet learned to have a fear of man. The uninjured hawk was resting comfortably on a TV antenna, and when I got up on the roof, we were practically looking at each other eye to eye. The injured hawk was on top of a roof vent and was also completely at ease-I was able to get within three feet of it with no indication of any fear on its part.

I left the injured hawk momentarily to get a blanket, and when I returned it had moved to the peak of the roof. As I approached, the hawk glided down into the backyard. Having the hawk down on the ground was a much better scenario-now I wouldn’t have to climb down the ladder trying to hold a wiggling hawk. I don’t know how I would have gotten down the ladder without using my hands!

Once down in the yard, I was able to corner the hawk fairly easily, and I gently placed a blanket over it and carefully picked it up, making sure to avoid its incredibly sharp talons. I placed the hawk in a box and drove straight to the Heritage Park Zoo in Prescott, where it would be cared for until it could be transported down to Adobe Mountain Wildlife Center in Phoenix.

I am usually a strong advocate for letting nature run its course and not getting involved with injured or orphaned birds. However, since the hawk’s injuries were human-caused, it only seemed right to get involved. I have to admit, I am not trained to do wildlife rescues, and only got involved because it was a weekend and no one would come out.

If you encounter injured wildlife, it is best to contact individuals who are licensed by the Arizona Game and Fish Department to handle these kinds of situations. I am hopeful the hawk will be successfully rehabilitated and released back into the wild-it was a magnificent bird!