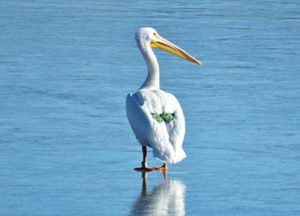 There are several examples of how every day citizens-individuals who are not scientists or biologists-contribute to the scientific knowledge of birds in a meaningful way. For example, the Christmas bird count has been going on for 116 years! Thousands of individuals have been reporting their bird observations for decades, and this information can be studied and analyzed to track trends in bird populations and movement.

There are a lot of serious birders, hobbyists like myself, who enjoy watching birds and recording their bird sightings in an electronic format where the information can be shared with others. As individuals record their sightings on eBird, the information becomes available and can be accessed by anyone with an eBird account.

their smart phone or computer.

About three weeks ago, an American white pelican was observed at Watson Lake and it was reported on eBird (it was still there as of Tuesday, Jan. 5). Flocks of birders-no pun intended!-went out to see this unusual bird. After it had been there for a few days, birders started noticing that the pelican was wearing a bright green tag with the words UTAH, along with other letters and numbers.

The administrator for the Prescott rare bird alert Yahoo group sent out an email to the birding community requesting pictures of the pelican to see if it was possible to read the information on the tag. Several local photographers had taken pictures of the bird where the tag was visible, and some of the better quality pictures revealed what those letters and numbers were.

Someone in Tucson receiving the email request for pictures reported that there had been a ‘UTAH’ tagged pelican in Tucson back in October which was reported to the Avian Conservation Program Coordinator for the Utah Division of Wildlife Resources. Information from an online website reported that 540 juvenile American white pelicans were tagged on Gunnison Island, in the Great Salt Lake, in 2013.

Armed with the information from the pictures of the tag of the Prescott pelican, the information was reported to and confirmed by the Avian Biologist in Utah that the pelican at Watson Lake was indeed one of those 540 birds that was tagged on Gunnison Island, Utah, back on June 25, 2013, and this was the first reported sighting of this particular pelican since it was tagged.

I think it is really amazing how so many different people were involved from the original tagging and banding of the bird in Utah, to the point where it was photographed, and the information was reported, confirming the origin of the bird.

If you see a bird that is either banded or tagged, I would encourage you to try to photograph it and share the information so the movement of the bird can be tracked. I had such an experience back in 2010 when I saw a black-backed woodpecker in South Dakota that was banded. I was able to share this information directly to the wildlife biologist who had originally banded the bird. The biologist was so excited to learn of the whereabouts of the bird, as he had lost track of it.