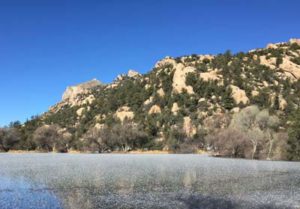 Wednesday, Dec. 16, was the Prescott Audubon Society’s Christmas Bird Count. My assigned area was Granite Basin, from Iron Springs Road to Granite Mountain. I arrived well before sunrise, and started birding at 7 a.m. The temperature was a whopping 7 degrees.

I spent the first hour looking for birds in the chaparral habitat between Iron Springs Road and the saddle. Once you cross over the saddle and drop into the basin, the habitat changes dramatically.

You may recall we had a pretty good snowstorm a week ago Monday, and two days later, the snow hadn’t melted down in the basin. Much to my surprise, I found the gate to the basin locked – due to weather, even though it was a beautiful, cloudless day. The road, however, was icy, especially in shady areas.

Not being able to drive down into the basin was a game changer for me. It totally altered my plans for the entire day. My usual birding strategy is to drive short distances (to get warmed up), get out and bird an area, and repeat the process again, visiting different areas within my assigned territory. Not being able to drive into Granite Basin resulted in a new plan – not necessarily a strategy.

In order to cover my area. I was now left to hike my territory since I couldn’t cover it by vehicle. I estimate that I hiked at least 12 miles – all in the snow. It was cold, icy and challenging, but I loved it all. What an incredible day to be out in nature!

When I finally arrived at the lake, I discovered another surprise – the lake was completely frozen over, from edge to edge. When I saw the lake, I said to myself, “Wow, I just lost a lot of birds today.” I usually add a lot of species to my count at the lake.

The combination of snow and cold temperatures resulted in far fewer bird sightings compared to previous years. There were many species that I struggled to find, and some species that were just nowhere to be found.

Not that I see these species every year, but there are many years when I see some of the following species; red-breasted nuthatch, Cassin’s finch, red crossbill, golden-crowned kinglet and olive warbler. I didn’t see any of these species. I had to really work hard to find what I did see – it was just a very quiet day bird-wise down in the basin.

My best find of the day was not until late in the day when I flushed a sora rail that was foraging down on the ground on a hillside on the north side of the lake. I’m not sure who was more surprised – me or the rail. When I spooked it, it flew over to the lake and landed on top of the ice, affording me an unobstructed view.

The only other birds I saw on the lake were two American coots that were somehow eking out an existence at the lake in spite of there being no open water. They too were foraging on the grasses that were growing on the south-facing slope above the lake.

Here is my version of the 12 days of Christmas using some of the actual numbers from my day of birding at Granite Basin:

Merry Christmas, and until next week, Happy Birding!