‘Chipping’ calls a sign that fall warblers are passing through 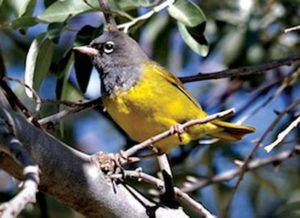 This past Sunday I heard the strong “chipping” call notes of a warbler in the backyard. I didn’t know what kind of warbler it was, but I definitely knew it was a warbler.

I grabbed my binoculars, headed out to the yard and was able to locate the source of the sound – a female MacGillivray’s warbler. Needless to say, I was pretty excited to see this species in my yard.

While it is not yet officially fall, many wild birds are already on the move. Over the next several weeks, a variety of warbler species will be passing through the Prescott area as they migrate south.

There are two different groups of migrating warblers – those that breed at the higher elevations throughout the Central Highlands of Arizona, and those that will be passing through our area as transient species, moving south from northern United States and Canada.

Warblers are not seed-eaters. They are insect-eaters, so they are not easy to see if you are sitting inside your house looking out the window watching the action at your seed feeders. Warblers are busy birds and rarely sit still – they move about in the foliage of trees and shrubs in constant search for food.

The best way to find warblers is to go out into your yard and listen for them and watch for their foliage-gleaning behavior. I encourage you to be observant to unfamiliar sounds, and when you hear something you don’t recognize, grab your glasses and go look for it!

The different kinds of warblers that you might see over the next few weeks depends on where you live and what your habitat is like. It has been my experience that where I live (near Rosser Street,) I am more likely to see transient migrating species in my yard and less likely to see the varieties of warblers that breed at the higher mountainous elevations of central Arizona.

Here is a list of some of the warbler species that are already on the move, or that will be soon.

Orange-crowned warbler: A dull yellow, non-descript species. The orange on the crown is not always readily visible.

Nashville warbler: A small yellow and gray warbler with a complete eye ring. Males have rufous on the crown of their heads and have more yellow than females.

Townsend’s warbler: A striking warbler with a bold black and yellow facial pattern, and streaking down the flanks.

Hermit warbler: Males have a bright yellow head and face, and a black throat. Females are marked similarly; the coloring is just more subdued.

MacGillivray’s warbler: This species has a distinctive broken eye ring with a hooded appearance like a dark-eyed junco. It has a yellow underside and a greenish back.

There are several varieties of warbler species that summer at the higher elevations in the Bradshaw Mountains and on Mingus Mountain. These species will also be moving south, but unless you live at a high elevation with ponderosa pines it is not likely that you will see these species in your yard. The list of high-elevation warblers includes red-faced warbler, painted redstart, Grace’s warbler, black-throated gray warbler and olive warbler.