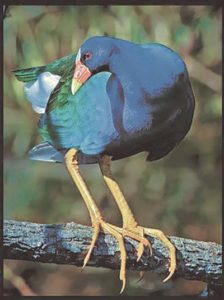 On Thursday of last week, I received a Prescott Rare Bird email notification of yet another rare bird sighting at Granite Basin Lake-this time it was a purple gallinule. Gallinules are similar to American coots, which are very common at all of the lakes in the Prescott area. This was the first time a purple gallinule has ever been seen in this area.

I took the liberty to leave the store early and ran over to the lake to see if I could catch a glimpse of it. I stayed for an hour and a half and didn’t see it, which was really disappointing, as this would be a new bird for my North America life list. What I did see were several other birders who were also looking for it. The word was out.

It wasn’t until late Saturday afternoon that I got the chance to go back out to the lake to try again. By this time the exact location where the bird was foraging was well known and widely shared. In the extreme southeast corner of the lake, there is a ‘beach’ area with a picnic table. This was the place. When I arrived on scene there was a birder there who had driven up from Tucson, and she had seen the gallinule just ten minutes earlier. I had high hopes of seeing it.

I didn’t have to wait too long before the bird emerged out of the cattails. It literally ran right out into the open, on top of the vegetation floating in plain view and began foraging. Wow, what a thrill to see this absolutely beautiful bird. It was a great find by the person who discovered it, and it was wonderful that this information got passed so others could go out and see it, as well.

Last Friday evening I went bike riding, and my car was parked at the south entrance to Watson Woods, at the corner of Rosser and Highway 89. When I returned to my car, I found a note stuck in my door handle that read, “Scissor-tailed Flycatcher seen today @ 1600 hrs. on the NE side off ramp of exit 243 on I-17 on the barbed wire fence.” I have no idea who left the note, but he or she obviously recognized my vehicle!

While this species would not have been new for my life list, it certainly would have been new for my state list. This is a species that summers in Texas and Oklahoma-not in Arizona. It is hard to know how some species get so far off-course when they migrate. Sometimes it is weather related. Other times it could be inexperience-such as a juvenile migrating for the first time.

It really is a marvel how birds find their way to and arrive at their desired destination. On Sunday of this week, I received reports from three different customers that white-crowned sparrows had shown up in their yard that day.

I invite you to join me this Saturday, Sept. 26, at 8 a.m. at Acker Park where I will be leading a bird walk as part of its 20th anniversary celebration. The park entrance where the festivities will be occurring is just south of Gurley at the end of Virginia Street.

One last reminder-the submission period for our annual wild bird photo contest continues until the end of the month. The deadline is 5:30 p.m. on Sept. 30. This free exhibit opens to the public on Thursday, Oct. 1. Visit the Jay’s Bird Barn website at www.JaysBirdBarn.com for more information.