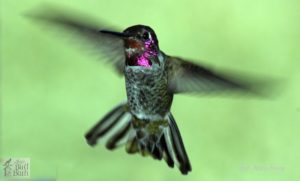 According to the National Weather Service, we will be seeing our first major winter storm of the season this weekend. Predictions include rain, snow and much colder temperatures.

Over the last several months, our feathered friends have been enjoying fabulous fall weather with unseasonably warm temperatures. Our summer monsoon rains produced a bumper crop of weeds and wildflowers, which, in turn, produced a generous seed crop. Between nature’s bounty and the mild weather, bird activity at seed feeders has been rather slow this fall.

Those who feed the birds in their yard will likely see a big shift in bird behavior both before and during the storm. I frequently comment that wild birds are nature’s barometer. You can tell when a storm is coming by the feeding frenzy that takes place before the storm arrives. It is as if birds can’t get enough food before seeking shelter and riding out the storm.

Birds are warm-blooded creatures and need enough fuel (food) each day to stoke their metabolic engines. Birds are capable of enduring bitter cold, even extreme conditions. The key to their survival is sufficient food. The reason many bird species migrate is not because they can’t withstand cold temperatures; it is because there is insufficient food to sustain them during the winter months.

In the Northern hemisphere, most birds migrate south because the food sources they rely on are not available in the winter months. Many of our migratory birds are either insect-or nectar-eaters. What happens to insects and flowers when we start getting freezing temperatures? Most insects and flowers are killed by freezing temperatures, leaving few bugs or flowers to be found.

Each winter we get isolated reports of Anna’s hummingbirds that winter over. How is this possible? It’s because people provide food for them that sustains them. Every winter we receive pictures from customers of a hummingbird sitting on a hummingbird feeder that is buried under several inches of snow. It is doubtful that hummingbirds could survive here in winter without human assistance.

Many of the bird species that live in our region during the winter months are seed-eaters. When we get a severe snow storm, natural food sources that these birds rely on are buried under the snow, making survival a matter of finding food. By keeping your seed and suet feeders filled with food products that are high in protein and fat, you help ensure survival of the birds that frequent your yard.

This is especially true for juvenile (also referred to as first-year) birds that have never experienced snow or winter conditions. Having a reliable food source is a great way to attract birds to your yard when times get tough. As mentioned earlier, when birds aren’t stressed they rely on nature’s bounty of seeds. However, when times are hard they know where to go to find a constant, reliable food source.

This past week I received an email from eNature.com. The feature article of the eNatureBlog was titled, “How Do Birds Deal with Hurricanes like Sandy?” While the article didn’t have a lot of factual comments, it raises an interesting question. There is no doubt that many birds die when they are caught in large storms such as Hurricane Sandy.

One thing the story pointed out, though, is that while there may be an immediate short-term impact, in the long-term bird populations generally are not negatively affected by big storms.

Bottom line: It is not easy being a bird in winter!