Change in elevation results in a change of bird species 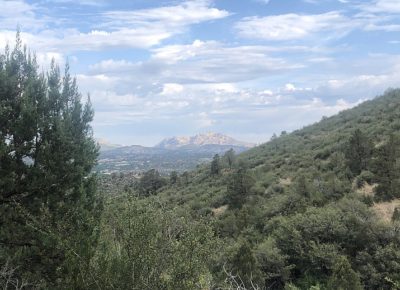 One of my memories of growing up in Tucson is visiting the Arizona–Sonora Desert Museum and viewing the outdoor exhibit that illustrated the concept of “life zones”. A wide path paralleled an area with plants found at 2,000 to 3,000 feet in elevation, plants that occur from 3,000 to 4,000 feet, and so on up to the 9,000-foot level.

A short walk from one end of the exhibit to the other would take you from the Sonoran Desert up to the Canadian life zone.  Signage accompanying each life zone illustrated what kinds of plants made up and defined each unique life zone. As I have written in previous columns, birds are habitat-specific and occur in areas that are suited for their needs — mostly based on food resources.

This past Saturday my wife and I hiked a segment of the Prescott Circle Trail, and it reminded me of the life zones concept. Our starting point was the Turley Trail in Government Canyon. The Turley Trail connects to segment six of the Circle Trail. After more than 9 miles of hiking, we ended up on Senator Highway just south of Goldwater Lake.

Our starting point was in a habitat that would best be described as chaparral. The dominant plants in this habitat were scrub oak, mountain mahogany, bear grass, an occasional juniper and even a pinyon pine here and there.  As we hiked through this habitat, I listened to the bird chatter and identified the birds that were all around us — black-chinned sparrows, mourning dove, spotted towhees, Bewick’s wren, Woodhouse’s scrub-jays, crissal thrashers, juniper titmice and bushtits, to name a few.

As the trail gradually wound through the hillsides south of Badger Mountain (P-Mountain), the habitat changed — as did the bird activity.  One of the things that really fascinated me was how striking the difference was in the vegetation between south-facing and north-facing slopes.

The abundance of plant diversity on the north-facing slopes contributed to a higher diversity of bird species. As we continued hiking, we went from one life zone to another — from chaparral to pinyon/juniper, to ponderosa, and for a brief period of time we were even in an area with firs!

Since this was primarily a hike, I didn’t do a lot of bird watching where I used my binoculars (even though I was wearing them). Rather, I did most of my bird “watching” by ear — listening to the vocalization and identifying the many varieties of birds. We were on the trail for just under four hours, and I identified about 30 species just by sound alone.

If you haven’t hiked the Prescott Circle Trail, I highly recommend it.  Keep in mind, though, that it is a big undertaking. If you need information on the Circle Trail, we have copies of the “Guide to the Prescott Circle Trail” in the store.  While I have not yet completed all of the segments (there are 11) I am well on my way to completing the 53-mile trail! Depending upon what section one hikes, some segments are very flat — such as areas around Willow Lake and Watson Woods — while other areas have more elevational change, such as up in the Bradshaw Mountains.