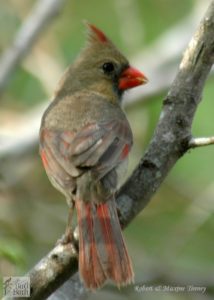 This past week I was at a customer’s home in Ponderosa Park off of White Spar Road. They were out of town, so I was filling their seed feeders and looking after their place. As I went to leave, I saw a male Northern Cardinal in the yard. I was so surprised that I rushed back into the house to grab a pair of binoculars.

I was enjoying great looks at the cardinal when I discovered that there was not one but two male cardinals in the yard! What a shock. Cardinals in the Prescott area are very uncommon, except for certain neighborhoods – mostly those along Willow Creek Road near Smoketree Lane and Jack Drive.

In Dr. Carl Tomoff’s “Birds of Prescott, Arizona” checklist, cardinals are listed as lr-P, T. What do those letters mean? The “lr” stands for “local (restricted to specific habitats or plant communities limited in area) and the “r” stands for rare (observed singly or in very low numbers). The “P” stands for Permanent (resident with little or no seasonal movement) and the “T” stands for Transient (present during spring and/or fall migrations).

In reality, they are both right, because there are cardinals that are permanent residents, and there are other cardinals that show up randomly during migration. Several years ago here in Prescott, we had a female cardinal show up in our yard Thanksgiving weekend, and it stuck around until March, never to be seen again.

One of the fun aspects of bird feeding is that you never know what you might show up in your yard (or someone else’s!) Seeing two cardinals in a Ponderosa Pine habitat was very unexpected. I was hoping the cardinals would stick around until the owners got back, as I imagine this would be a new bird for their yard list, but I haven’t seen them again since the first sighting.

You have probably noticed that white-crowned sparrows are back in good numbers. Just this week I saw my first ruby-crowned kinglet of the season. I haven’t seen any dark-eyed juncos or yellow-rumped warblers in my yard yet, but surely they are only days away from arriving. If you don’t have your suet feeder up yet, now is the time to do it.

The last day to cast your votes for our annual Wild Bird Photo Contest is this Saturday, Oct. 22. If you haven’t been in yet to vote, I encourage you to come in the next two days. We will be announcing the winners of the photo contest on Saturday, Oct. 29, at noon, in conjunction with our eight-year anniversary event.

In addition to announcing the photo contest winners, we will have live birds of prey on hand, and we will be giving away a free pair of Vortex binoculars. As always, we will be providing a very nice free lunch from 11 a.m. to 2 p.m. I would like to personally invite all of you to join me and my family as we celebrate not only eight years of business, but also the return of our son, Merritt, from Brazil. Our annual open house always proves to be a very joyous occasion, and I hope you will put it on your calendar and come on the 29th.