What do you call a group of hummingbirds? 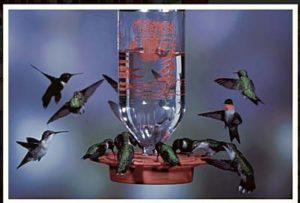 Earlier this week I was at a home in Forest Trails early in the morning, and the bird activity in the yard was amazing! I was out on the deck watching many different bird species taking full advantage of everything being offered-black oil sunflower seed, nyjer, suet cakes and hummingbird nectar.

Since none of those terms seemed to fit, and since I couldn’t come up with the right word on my own, I did what any Baby Boomer would do-I turned to the Internet. I Googled “What is a group of hummingbirds called,” and learned it is called a charm. Certainly a bunch of hummingbirds is quite charming, but then I thought how hummingbirds are certainly not very charming to one another.

They bicker and jostle and fight and chase and dive and squawk, even when the hummingbird feeder has enough nectar for a hoard, drove, group, mob, crowd, masses – or even a charm. So why aren’t hummingbirds more charming? Why are they so aggressive and territorial?

I suppose each individual hummingbird wants to claim the feeder as being in its territory, and seeks to defend the feeder from intruders. There certainly doesn’t seem to be any love lost. Males, females and even juveniles will all chase one another, whether they are the same species, or not. Juveniles learn very quickly the art of being aggressive if they want to get a piece of the action.

About the only time of day hummingbirds feed somewhat harmoniously is first thing in the morning and last thing at night. When you consider how they have to feed every 12 to 15 minutes throughout the day, after they have gone all night without eating, they are very anxious to eat at first light and are not willing to expend a lot of energy chasing each other around.

The same can be said of their behavior at dusk. Prior to sundown, they spend a lot of time at feeders “tanking-up” for the night, so they are not going to expend much energy chasing each other when they need to be eating.

I was so enthralled by the charm of hummingbirds I saw, that I decided to pull out my iPhone and shoot a video. I moved to within two feet of the feeder and did my best to stand absolutely motionless. The hummingbirds, being anxious to eat, came right to the feeder with no apparent fear. If you would like to view the video, I invite you to check out the Jay’s Bird Barn Facebook page, as the video is posted there.

In addition to all of the hummingbirds, there were flocks of bushtits visiting the suet feeder and flocks of lesser goldfinches visiting the nyjer feeder. There were also western bluebirds, scrub jays, acorn woodpeckers, northern flicker, pygmy nuthatch and mourning dove in the yard. My best find was a black-throated gray warbler gleaning for insects in the scrub live oak, just off the deck.

I hope you are enjoying lots of birds in your yard, and until next week, Happy Birding!