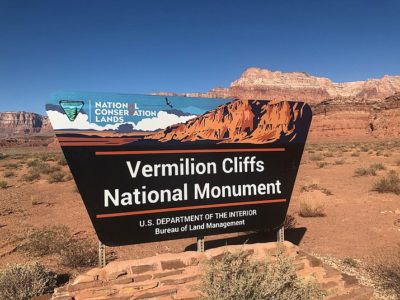 This past Saturday I had the opportunity to be in attendance as four captive-bred California condors were released into the wild at the Vermilion Cliffs, north of the Grand Canyon.

The event, hosted by the Peregrine Fund in cooperation with the BLM as part of the National Public Lands Day celebration, raised the number of free flying condors in Arizona to 89 birds.

Saturday’s event had a party atmosphere. It was a grand gathering, with hundreds of people in attendance—quite a contrast to the first condor release back in 1996. That first release involved six condors with only six wildlife biologists in attendance to witness the historic event.

People came from all over the United States. I even met one person from Australia! Why was this event such a big deal? Well, there was a time when California condors were on the brink of extinction. In 1982 the few remaining wild condors were captured in California, and a captive breeding program was initiated to save the species.

With only 22 condors left in the world, most people doubted the species could be saved. There are now approximately 250 condors in the wild, residing in three separate populations—two in California and one in Arizona. While their numbers are still critically low, progress is being made. It is nothing short of miraculous that this species did not go extinct.

Even with a well-managed captive breeding program, there are still many threats to the condor’s survival. Threats include being shot illegally, habitat loss, poisoning by ranchers and farmers, and lead poisoning as a result of ingesting lead shot used by hunters.

Condors typically lay only one egg every other year. Thus, it will take a long time before their numbers get to a point where we can be confident that this species is safe from extinction. The incubation period is 57 days and the sole fledgling stays in the nest for six months before it is ready to take flight. After hatching, the parents continue to care for their one chick for a full year.

Captive breeding programs help speed up the recovery of condor numbers. Each time a female in captivity lays an egg, that egg is removed from the nest, encouraging her to lay an additional egg. The young in captivity are fed by biologists using puppets that look like adult condors so the young birds will not be imprinted on humans.

The condor viewing site is about three miles north of Highway 89A off of House Rock Valley Road, 13.5 miles east of Jacobs Lake. With a 114-inch wingspan, condors are the largest bird in North America. Nevertheless, a good pair of binoculars or a spotting scope is required to see them as the distance from the viewing area to the cliffs is well over a mile.

The viewing area is open to the public 365 days a year. Next year’s condor release event is scheduled for Saturday, September 28th.

Put it on your calendar and join me. I plan on being there!

Tonight at 7 p.m. is a Prescott Audubon Society meeting at Trinity Presbyterian Church, located at 630 Park Avenue. Paul and Anne Schnell, from Arizona Raptor Experience, will be providing the program. If you can’t make this evening’s meeting, the Schnells will be bringing their raptors to the Jay’s Bird Barn 15-year anniversary celebration on Saturday, Oct. 27.

A final reminder—the submission period for our tenth annual wild bird photography contest ends this Saturday, Sept. 29. The exhibit will open to the public on Monday, Oct. 1 in conjunction with the fall seed sale.