Caching food for times of scarcity 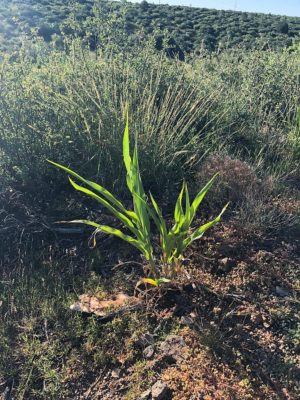 As we move into autumn, we may recall childhood memories of attending a fall harvest event. The activity of harvesting is as old as existence. Whether human or bird, there is an innate — almost urgent — need to both harvest and store food.

A recent hike on a segment of the Prescott Circle Trail provided evidence of this. While hiking, I saw corn growing in several places in the middle of a chaparral and pinyon-juniper habitat north of Pioneer Parkway, between Willow Creek Road and Williamson Valley Road.

Observing corn plants in this habitat raises the question — how did the corn get there? The most likely culprit is our abundant and busy Woodhouse’s scrub-jay. Scrub-jays, like many other wild bird species, have the God-given instinct to “harvest” and then store food. In the birding world, we refer to this behavior as caching food.

I am confident the jays found individual kernels of corn at someone’s bird feeder in the Pinon Oaks subdivision. Instinctively, the jays gathered the corn and buried it in an effort to save this food for a time of need in the coming winter months ahead.

Woodhouse’s scrub-jays are also guilty of gathering and burying peanuts in the shell. Each year at the Bird Barn, we sell thousands of pounds of peanuts in the shell to individuals who enjoy feeding birds. The jays take those peanuts and diligently (although hastily) bury them!

In natural, undisturbed areas, scrub-jays are known for harvesting and caching thousands of pinyon pine nuts each fall. Another jay species in the intermountain west known for this behavior is the pinyon jay. This is a highly nomadic species of jay that is notorious for pine nut gluttony! They harvest and store thousands and thousands of pine nuts — and cache them as a food source for the winter months ahead. Inadvertently, as they do so, the jays are also planting successive generations of pinyon pine trees.

In the Prescott area, one of the most common bird species famous for caching food is the acorn woodpecker. As the name infers, acorn woodpeckers have an affinity for acorns, and they gather them with gusto. As a family group, they work cooperatively to create a place to store the acorns they harvest. A favorite location is typically in a dead ponderosa pine tree, referred to as a “snag.” The woodpeckers create thousands of holes in the bark of the tree and store a single acorn in each hole!

It is not unusual for acorn woodpeckers to store between 40 and 50 thousand acorns in a single snag! These trees are referred to as a granary, and are an impressive sight of industry and effort. A good place to see an example of an acorn woodpecker granary is at Goldwater Lake.

Another species who is an overachiever when it comes to harvesting and caching food is the Clark’s nutcracker, receiving its name from the Lewis and Clark expedition. It is estimated that an individual bird will collect and hide approximately 100,000 pine nuts each fall. More impressive is the fact that it is estimated they have a 97 percent retention rate in relocating their booty — even months or years later!

As we move into fall, don’t be surprised to see family groups of jays busily harvesting pine nuts from pinyon pine trees and hurrying off to bury them.

And, don’t forget — the submission period for our 10th annual wild bird photography contest runs through Sept. 29. For more information on the contest, stop by the store or check out the Jay’s Bird Barn website at www.jaysbirdbarn.com.

Eric Moore owns Jay’s Bird Barn, with three locations in northern Arizona — Prescott, Sedona and Flagstaff. Eric has been an avid birder for over 50 years. If you have questions about wild birds that you would like discussed in future articles, email him at eric@jaysbirdbarn.com.