Burrowing owls can use your help with habitats 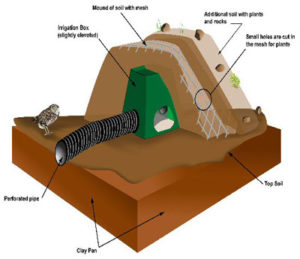 I mentioned in my column last week how a homeowner invited me out to see several western screech owls that were roosting in her carport. The same day my column ran in the Courier, I received an email from an avid reader and she wanted to let me know she had burrowing owls on her property!

After exchanging several emails, we came up with a date and a time when I could go to her home to look for the owls.

It turned out the owls were very cooperative, and, using my binoculars and my spotting scope, I was able to get great looks at both the male and the female.

I was very impressed by what the homeowners have done to accommodate and encourage the owls to stay on their five-acre property. Burrowing owls, as their name suggests, live under ground, typically in burrows created by prairie dogs and other small mammals. In the absence of natural burrows – which serve as both a roosting and a nesting location for the owls – individuals can create artificial burrows.

When the homeowners bought their property, they discovered the burrowing owls were using a metal culvert that went under their driveway. The culvert was meeting the owls’ basic needs, but there were some concerns. The ends of the culvert were partially crushed, and there was the risk of their burrow being flooded.

In an effort to provide more suitable housing, the homeowners went to the internet and did some research to see what they could do to create artificial burrows. Fortunately, this is a topic that is well documented online. I typed “burrowing owl artificial burrow construction” into Google and came up with a list of helpful websites.

One website that caught my eye was for a nonprofit bird rescue organization in Cave Creek called Wild At Heart that specializes in rescuing birds of prey. Type www.wildatheartowls.org into your web browser. There is a tab on their home page titled “Burrowing Owl Project” that you can click on.

Using irrigation boxes and drainage pipe, the homeowners built two separate burrows on their property, and the owls quickly moved in and took up residence!

I think if more individuals who live in an open grassland habitat were aware that they can possibly attract burrowing owls to their property, they might seriously consider building artificial burrows.

Having owls around has its benefits – the homeowners mentioned they’ve never seen a mouse on their property! Even with the owls present, their yard was teaming with a variety of wildlife including birds, rabbits and lizards. It is a testament that prey and predator can coexist in close proximity and strike a sustainable balance.

It was fascinating to watch how some birds – mostly northern mockingbirds – were not happy to have the owls around and were constantly harassing and taunting them. Other species such as horned larks just went about their business of feeding without giving the owls a second thought.

Anyone living on a few acres of grassland habitat north of Highway 89A in the Poquito Valley and Lonesome Valley areas has a good chance of attracting burrowing owls to their yard if they were to create artificial burrows for them.

Interestingly, burrowing owls are equally active during the day as they are at night. The homeowner where I observed the owls has an office that looks out over the area where the owl burrows are, and she has a hard time getting anything done as she is constantly looking at the owls throughout the day!