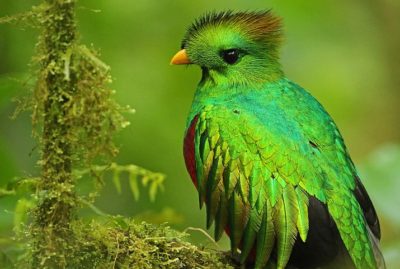 The Jay’s Bird Barn/Prescott Audubon tour of Costa Rica began on Wednesday, Feb. 14, and I arrived two days earlier to do some birding on my own.

For my personal list, I have seen close to 290 bird species. I have also seen and heard numbers of species that have gone unidentified — always a part of the challenge when birding in a new part of the world.

When we left the city of San Jose, we headed west to our first location, on the Pacific side of Costa Rica, where the habitat and terrain are gorgeous.

We stayed at Hotel Villa Lapas. A river ran through the property, and we ate all of our meals outside, near the river.  We found many interesting bird species right on the grounds of the property, including yellow-throated toucan, fiery-billed aracari, bare-throated tiger heron, spectacled owl, scarlet macaw and many more.

We start bird watching each morning at 5:30, before breakfast, because the old adage is true — the early bird gets the worm! Early morning hours are the most productive for bird watching.

Villa Lapas is within close proximity of Carara National Park and the Tarcoles River. We visited the park on two different days, and our boat ride on the Tarcoles River was magical. We saw an incredible variety of birds, including double-striped thick-knee, yellow-headed caracara, mangrove hummingbird, Panama flycatcher and a plumbeous kite, as well as many, many other species.

Leaving Villa Lapas, we went south along the coastal highway that parallels the Pacific Ocean. At lunch time, we stopped at an eco-lodge that looks over the Pacific. We birded there for several hours and added several species to our trip list, including linneated woodpecker, golden-naped woodpecker, and red-lored parrots. From a distance, we also saw brown boobys on a small, rocky island.

We left the lodge and made our way up, up, up — into Costa Rica’s central, high-elevation volcanic region, climbing to an elevation in excess of 10,000 feet. What a contrast — from sea level, then, within a few hours, we were in a cloud forest!

At another lodge, where we stopped in at a restaurant, hummingbird feeders were hanging from the eaves of the building. The feeders made bird watching there a lot easier. Trying to find a hummingbird in the wild in a cloud forest is not, otherwise, an easy task. But at this location, we added several new species to our trip list, and, for me, personally, to my life list.  The hummers visiting the feeders were one or two feet away from us. I had to back up to focus my binoculars.

We stayed two nights at the Paraiso Quetzel Lodge. Our target bird at that location was the resplendent quetzal. Any serious field birder who has traveled abroad probably has this species on his or her bucket list of birds to see.

In my estimation, this is one of the most beautiful birds anywhere. Seeing this species in person is the best way to appreciate its beauty, its unique colors and the patterns of its feathers. In adult males, the most impressive feature is its long tail feathers — extending more than two feet from its body.

We left the lodge early in the morning with a local guide, in search of the quetzal. Each day the guides receive phone calls from local farmers, who let the guides know whether any quetzal is on their property. If the bird is there, the guide takes his group to the property, and if they see the quetzal, the farmer gets paid.

At the second location we visited that day, we were rewarded with views of a male quetzal at close range.

Words cannot express my emotions on seeing this bird for the first time. Feelings of relief and joy washed over me.

Our visit to the high-elevation area also resulted in many other amazing sightings, which I will try to share in the future.

Eric Moore is the owner of Jay’s Bird Barn, with three locations in northern Arizona — Prescott, Sedona and Flagstaff. He has been an avid birder for more than 50 years. Email questions about wild birds to eric@jaysbirdbarn.com.