Birds get creative when nesting in urban setting 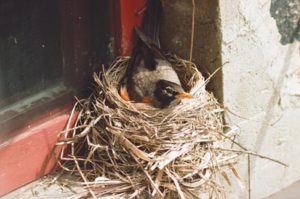 Just over a week ago, I was parking the seed truck behind the new Beall’s Outlet store. As I got out of the truck, I could hear the faint sound of peeping baby birds. In the parking lot, there is a drain in the asphalt with a large metal grate. At first, I thought that perhaps a baby bird had fallen down into the culvert and couldn’t get out.

However, as I approached the drain, I could tell that the sound was not coming from there, but was coming from somewhere else. A few feet from the metal grate is a large retaining wall between the parking lot elevation and Willow Creek Road. When the retaining wall was built, they drilled drainage holes through the wall to allow excess water to seep out from behind the wall.

As I walked in the direction of the peeping sounds, I found myself standing directly in front of one of these holes in the retaining wall. As I peered into the hole, I saw several gaping mouths anticipating food. What an ingenious place to build a nest! But whose nest was it? I backed away to see if a parent might bring in a mouthful of food.

Sure enough, I didn’t have to wait long. A swallow arrived and quickly flew directly into the hole, disappearing to my view. Within seconds, it emerged from the nest and took flight.

For years we have had flocks of cliff swallows attempting to build mud nests over the peaked entrances of Safeway. After those areas were covered with netting, the swallows gave up and settled on building their nests over at the YMCA on Division Street.

On another note, the baby house finches in the nesting box just outside of the entrance to the store have fledged. I was particularly worried about one of the babies. While it was still in the nest, I could see (with binoculars) that it had only one eye.

The day it fledged, it placed itself in some pretty precarious situations. At one point, it was on the sidewalk right next to the parking lot. I was concerned that it would either get stepped on – or worse, run over by a car. It was easy to sneak up on it since it only had one eye. I caught it with the intention of releasing it in a safer location, but as soon as I let it go, it flew into the parking lot.

This was not good. Being on the sidewalk was bad enough, but being in the parking lot was worse. I snuck up on it again, caught it, and brought it back to a safe location. However, as soon as I released it, it took flight again. Determining that it was in a safe place, I just decided to follow my own advice and let nature run its course. I haven’t seen it since.