Birds can usually be found where their favorite food is 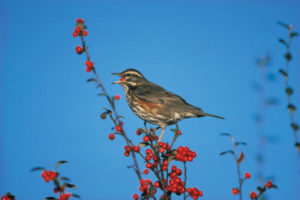 Birds are very habitat-specific. Birds’ habitats match their foraging behavior and provide the types of food they prefer. If I were to tell a knowledgeable birder that I saw a particular bird species, he would be able to guess with reasonable accuracy what habitat I was in when I saw the bird in question.

Here are some examples:

This past week I saw a flock of about 70 white-faced ibis. Where was I? If you guessed Willow Lake, you would be correct. Ibis are long-legged wading birds that feed on mudflats and in shallow water.

This past week I saw two Forester’s terns. Where was I? If you guessed Willow Lake again, you would be right. A variety of migrating water-dependent bird species such as gulls and terns use the lake as a stopover to refuel as they migrate south.

This past Sunday I saw a northern mockingbird. Where was I? I was actually a little surprised by this chance encounter. I was driving through the housing development known as The Crossings, which is just off Willow Creek Road. The habitat is fairly open with a smattering of walnut and hackberry trees.

On Labor Day, I saw a northern cardinal. Where was I? This one is a little tricky, as cardinals are not very common in the Prescott area. I was on Sequoia Drive just north of Smoke Tree Lane. This is one place in Prescott where there is a permanent, albeit small, population of cardinals. The habitat in this area is thick with live scrub oak.

I saw flocks of Swainson’s hawks. Where was I? I was about twenty miles out Williamson Valley Road in a grassland habitat that was overrun with large grasshoppers – an important food source for migrating Swainson’s Hawks. If you want to see these migrating hawks, turn left at the large Las Vegas Ranch sign at the corner of Williamson Valley and Fair Oaks Road.

I saw a greater roadrunner. Where was I? I was on Tonto Road, and yes, true to its name, the roadrunner ran across the road! The habitat was scattered juniper and pinyon pine with plenty of tall grass. I assume the roadrunner was taking advantage of the abundant giant grasshoppers.

I saw a loggerhead shrike. Where was I? I was on Tonto Road, in an area with scattered live scrub oak in a grassland setting.

I saw a belted kingfisher. Where was I? Even I was surprised to see this bird where I saw it. It was at a man-made cattle stock tank that was stocked with bass, catfish and minnows. The pond was a very long way from any significant bodies of water, so it was fascinating that the kingfisher found this little oasis in the middle of a pinyon/juniper habitat strewn with granite boulders.

I saw two hermit warblers. Where was I? I was in a Ponderosa Pine habitat off Granite Basin Road. This is an example of a warbler species that is migrating through the area, refueling on its way.

If you are interested in turning your yard into a wild bird habitat, I invite you to attend a free class I will be teaching next week. On Wednesday, Sept. 11, from 5:30 to

7 p.m., I will be speaking at The Native Garden store at 602 S. Montezuma Road. I will be discussing the importance of landscaping with native plants to attract the widest variety of birds to your yard.