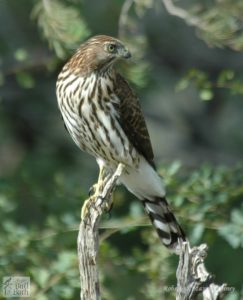 Last week I had the pleasure of being the guest speaker for the Red Cliffs Audubon chapter in St. George, Utah. It was a small but passionate group of birders. While in St. George, I did quite a bit of birding and amassed a respectable list of birds including golden eagle, peregrine falcon and several desert sparrow species including brewers, black-chinned and black-throated.

The highlight was when an adult Cooper’s hawk swooped right in front of me – carrying prey in its talons. It landed in a desert willow tree and proceeded to eat all but the head and tail of a very large desert spiny lizard.

The hawk was so focused on its meal, that I was able to take baby steps towards it until I was only about 25 feet away. Using my 10×42 EL Swarovski binoculars, I watched the hawk eat its meal. With the 10-power magnification of the binoculars, it was as if I were only two and a half feet away! Its table manners weren’t very good, but it certainly knew how to eat a big, spiny lizard.

On Tuesday of this week, I led a guided bird walk for some of the wonderful Highlands Center naturalist volunteers. As it turned out, it was probably the windiest day of the whole year! As I was driving over to Watson Woods where we were meeting, I wondered what kind of day we would have because of the relentless wind.

Our walk started at the Highway 89 overlook, and we proceeded south on the trail paralleling the lake and the highway. We saw a good variety of water birds including a stunning male Cinnamon Teal, several Northern Shovelers, Gadwall, Bufflehead, Mallard, Wood Duck, Double-crested Cormorant and Pied-billed Grebe.

Recent spring arrivals really stole the show – especially a male summer tanager that was fire-engine red! The highlight for me, personally, was seeing a very strangely colored woodpecker that I don’t quite know what to think of. Further studying will be necessary to come to some conclusion on this bird. The head and facial pattern was a typical-looking male hairy woodpecker. However, the back and wings were an unusual rich brown color instead of being black as is typical for a Hairy Woodpecker. Fortunately, one of the participants had a digital camera and took pictures of the bird so I can study it further.

It was a great day for birds of prey – we saw a common black hawk, several red-tailed hawks, two American kestrels (each carrying prey) and a peregrine falcon!

Be on the lookout for lazuli buntings. Earlier this week, two different homeowners – one in Yavapai Hills and one in The Ranch – reported seeing lazuli buntings in their yards. Buntings like white-proso millet if you want to attract them to your yard.

Tonight at 7 p.m. is the Prescott Audubon Society membership meeting at Trinity Presbyterian Church located at 630 Park Ave. in Prescott. Go to Prescottaudubon.org for more information.

Saturday, April 20, will be the kick-off for the fifth annual Birding Spree sponsored by the Highlands Center for Natural History. I will give a brief talk about the birds in the Central Highlands, followed immediately by a free guided bird walk. This event is open to the public, and I invite you to attend.

Next week, April 25-28, is the Verde Valley Birding and Nature Festival at Dead Horse Ranch State Park in Cottonwood. There are seminars, workshops and field trips each day. If you are interested in attending, visit their website at birdyverde.org.