Birds and beyond – Encounters with local wildlife 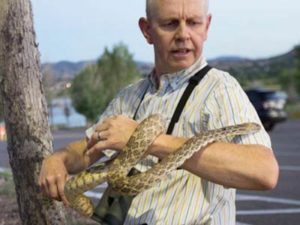 Last week, after a big rainstorm, my wife and I decided to hike the Flume Trail in Granite Dells. The trail makes a big loop – at one point paralleling Granite Creek as you make your way to the back side of the Watson Lake dam. The volume of water cascading over the spill way was a sight to behold. The water was rushing over the granite boulders with such force it was like white water rapids!

The loop back from the dam is mostly over granite boulders that are marked with white dots so you can follow the trail route through the rocky terrain. The sun had already set and the light was fading. As we hiked, we spotted a large great-horned owl flying just a short distance away. It landed on a large boulder and was quite tolerant of our presence – allowing us to hike fairly close to it before deciding to take off.

I was so focused on the owl that I hadn’t noticed a mammal lumbering toward a crevice in the rocks. My wife saw it and in an alarmed tone of voice quickly got my attention. I hustled over to where she was standing and caught a brief glimpse of a large porcupine as it crawled into the safety of a rocky grotto. Fortunately, I had my binoculars with me so it was able to see it really well without having to get too close!

After admiring the porcupine we resumed hiking and it wasn’t long before we discovered a second great-horned owl! It was interesting to observe the interaction between the owls and other birds in the area. I suppose the owls had just left their daytime roosting locations so they could begin hunting. As soon as the owls were out in the open, a chorus of unhappy birds greeted them, sounding alarm calls to warn other wildlife in the area to the presence of the owls. Some of the bird calls were those of the acorn woodpecker, western scrub-jay, rock wren, spotted towhee, and rufous-crowned sparrow.

Over the past two weeks I have had three different encounters with snakes as I have been out and about. The first encounter was on the Peavine Trail, about three-quarters of a mile from the Sundog Road parking lot. An Arizona black rattlesnake was making its way very slowly across the trail. Several people gathered to look at the snake as it leisurely made its way into the weeds bordering the trail.

The very next day my wife and I narrowly escaped running over a small bull (gopher) snake stretched across the trail on the north side of Willow Lake near the boat dock. We braked hard and stopped our bikes just in time. The snake didn’t seem to have any desire to move, so I bent down and started stroking it, at which point it realized that he probably needed to get moving!

This past Sunday we were walking in the parking lot of Willow Lake by the boat dock when we encountered an enormous bull snake. It has been a long time since I have seen a snake that big, so we took several pictures of it.

Last week a customer emailed me a short video clip of a red-tailed hawk all wrapped up by a bull snake. I have posted the video on the Jay’s Bird Barn Facebook page if you would like to view it. The hawk probably would not have survived if the person had not freed the hawk from the snake’s grasp.