Birding: Wrapping up our trip to Tanzania with a birding extension 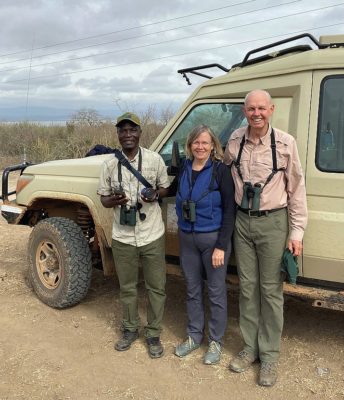 Martin, our birding guide for our one-week extension, was absolutely phenomenal. (Eric Moore/Courtesy)

Our 14-day ‘Northern Tanzania Wildlife Safari’ ended on Sept. 5. Leaving our group, Gayla and I transferred to a different safari vehicle with a new driver and a birding guide. We were headed for a custom-tailored, one-week extension that was totally bird-focused, taking us to new habitats in northeastern Tanzania.

We were no longer in large National Parks and Game Preserves where we were confined to our vehicle to view the wildlife. Being able to get out and walk increased our opportunity to see many more varieties of birds, while visiting new areas resulted in seeing new species that were not seen in the areas we had previously visited.

Our first day was a 10-hour drive to East Usambara — a mountainous cloud forest less than an hour from the Indian Ocean. This habitat was totally unlike anything we’d previously visited. It was a very dense forested jungle with giant trees. If I didn’t know any better, I would have thought I was in Brazil or Belize or Costa Rica; not Africa! The vegetation was so thick, there was no way to walk through it — we could only bird from dirt roadways and on trails used by villagers.

Our birding forays started each day at 6:30 a.m. and went until about 6:30 p.m., with a brief stop for lunch. According to the health app on my phone, I walked about 40 miles over the next three days. It rained a lot — several times a day — but we were prepared, and we kept birding even in the inclement weather.

After four nights at Amani Nature Reserve, we traveled to the Western Usambara Mountains, which were slightly higher but not as wet. We stayed at a lovely German lodge — Mullers Mountain Lodge — and we loved our time there. Once again, we birded from roadways and trails and enjoyed a forest that was a little more open.

Leaving Muller’s Lodge, we made our way back to Arusha, making numerous birding stops along the way in a variety of different habitats. It fascinated me that some of the drier, more inhospitable-looking areas were some of the birdiest areas, and I continued to add new species to my trip list.

Back in Arusha we did a one-day extension to an area called Lark Plains, north of Mount Meru. The mountain creates a rain-shadow effect on the plains. This area was harsh, bleak and uninviting.

We specifically went there to see a critically endangered bird species — the Beesley’s lark. This rare species is only found in a very small area that is heavily over-grazed by the Maasai people’s animals. It is estimated that there are only 50 Beesley’s larks left in the world. We saw seven of them.

This was our last day of birding in Tanzania — which was both wonderful and sad. As the trip drew to a close, I had seen over 460 bird species! Combining this three-week trip with the birds I saw on my three-week Botswana, South Africa and Lesotho trip in 2009, I have now seen more bird species on the continent of Africa — in six weeks — than I have seen in North America over the last 60 years! Needless to say, it has been a marvelous experience.

If you are interested in traveling to Tanzania, I highly recommend Aardvark Safaris Tanzania. In a day or two, I will be putting a link to their website on the Jay’s Bird Barn website.