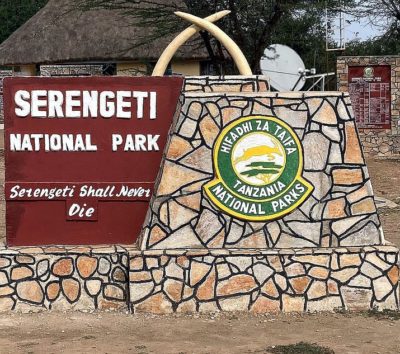 Arriving in Serengeti National Park, we spent our first night at a tented camp — Embalakai Authentic Camp. I did not realize that all of our camps would be open — they were not inside a fenced enclosure. When it was dark, we were required to have an escort from our tent to the main lodge and back. One night, as a young man (carrying a spear) escorted us back to our tent, there was a spotted hyena only 50 feet away; walking parallel to the trail we were on!

Our next stop was Serengeti Mara River Camp. What a spectacular setting. Our visit to Tanzania coincided with the great mammal migration, and there were literally thousands and thousands of wildebeest on the move. Looking out from our tent, we could see hundreds of wildebeest only 200 yards away as they slowly walked through our camp.

One of our ‘goals’ while spending time in this area was to actually witness a river crossing. This is where wildebeest dash across any number of rivers, in long lines consisting of hundreds — if not thousands — of animals. These river crossings can be perilous, as crocodiles are in the water, and large cats, such as lions, are always on the lookout for heavy concentrations of wildebeest preparing to cross.

A typical day started with a game drive at 7 a.m. returning to camp about 6 p.m. We viewed both mammals and birds from the safety of our vehicle. In the national parks, people are not allowed outside the vehicle, except when in camp. We often stood in our safari vehicle, affording us a 360-degree view.

One day we were fortunate to situate our vehicle in the perfect spot, where river crossings were occurring on our right and on our left. It was fascinating to witness how once the crossing began, the pace of the herd picked up and the wildebeest just kept coming and coming and coming. At one point, as the wildebeest were crossing, a lioness came running out of heavy brush and ambushed the herd, only to come up empty-handed.

Our efforts to find big cats was slow initially, but one afternoon we hit the jackpot. Our driver spotted a lion, so we drove to it. Not only was there a lioness, but she had four cubs and a fresh zebra kill! Initially she and the cubs hid in tall grasses, but after a short amount of time she felt safe to come right out into the open where the zebra carcass was, and her cubs followed her.

Fortunately, animals in Serengeti National Park are accustomed to vehicles, and pay little attention to them. We had a magical experience as we watched the mother and her four cubs gnawing on the zebra! We were probably no more than 20 feet away — it was breathtaking!

On another morning, we saw a female cheetah with her two cubs, and about an hour later we found a group of seven lions eating a freshly killed adult zebra. On another day, our driver spotted a leopard up in a tree — we stopped to look at it and discovered it had dragged a young zebra up into the tree. Simply incredible!

The Serengeti straddles the borders of both Kenya and Tanzania, and one day we actually drove into Kenya for a short period of time. I was excited to be able to start a life list for another country! Needless to say, we are having a trip of a lifetime, and I have seen more than 300 new birds species so far.