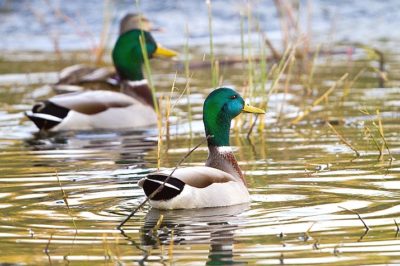 Happy St. Patrick’s Day! As I was thinking of a topic to write about this week, my mind settled on the thought of how there are so few songbirds with green plumage. Thinking about it more, I realized that many of the bird species sporting green are water birds, which struck me as interesting.

If you were to ask me why this is, I honestly don’t have an answer. In my mind, it would make sense for songbirds to have green plumage to blend in with the foliage of trees as a form of camouflage, but that just isn’t the case in North America.

Certainly there are a lot of birds in more tropical habitats with green plumage, such as parrots and parakeets. Why there would be predominantly green birds in the tropics, but not in North America, is an interesting thought to contemplate.

Doing a little research, I referenced the two volumes of the “Sibley’s Birds of the Arizona Central Highlands” folding guides, looking for local bird species with green plumage. Of the one hundred and forty-five species covered in the two folding guides, I came up with only a handful of birds that have some green in their plumage.

Volume one of the folding guide strictly covers bird species you are most likely to see in your yard. Of the seventy-three species in this volume, there were very few birds with green other than hummingbirds and violet-green swallows. There were a few species with an olive/yellow wash on parts of their plumage, such as lesser goldfinches and ruby-crowned kinglets.

There are a few examples of species that may appear to be green due to the iridescent quality of their feathers. For example, some feathers on wild turkeys, roadrunners, and great-tailed grackles—depending on lighting conditions—can appear to be either black, purple, or even green.

Volume two of the “Birds of the Arizona Central Highlands” folding guide has seventy-two species of birds you are most likely to encounter as you spend time out in nature, such as when hiking around Willow Lake or walking on the Peavine Trail. Several duck species, including wood duck, northern shoveler, American wigeon, mallard, green-winged teal, common merganser and common goldeneye all have a fair amount of green. Interestingly, the green plumage on all of these species is on their heads.

Again, you may ask why. Honestly, I don’t know the answer to that question. It just goes to show that no matter how much you know about birds, there is still more to learn. This is part of the fun of bird watching!

Earlier this week, while walking in Watson Woods, I both heard and saw some Lawrence’s goldfinches. This species is listed as ‘rare’ in eBird, and it required documentation when I reported my sighting.

Earlier this week a man in Lubbock, Texas called the store asking for help with bird identification. How he found me, I have no idea! I gave him my cell number, and he texted me a picture of the bird he saw in his yard. I was able to text him back the identification—it was a male ladder-backed woodpecker.

I invite you to email me with any unusual bird sightings you may have. Until next week, Happy Birding!