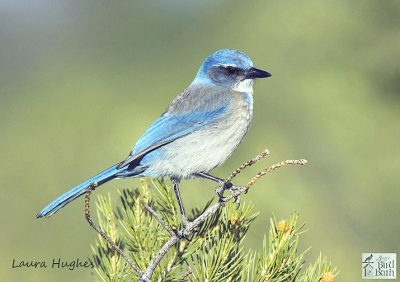 Woodhouse’s scrub-jays are an example of a local bird species that caches food in the fall. (Jay’s Bird Barn/Courtesy)

Wild bird migration is one of the greatest wonders in nature. The fact that creatures — some of them weighing mere grams — can migrate thousands of miles twice a year is a feat beyond our imagination.

While there is no way I can answer all these questions in such a short column (and many more that could be asked), I will briefly describe the issue of timing — how birds know when it is time to migrate. There are a lot of different environmental cues that contribute to migration, but one of the strongest cues is length of day.

Research has shown that birds have very thin skulls. The thinness of their skulls allows receptors in their brain, which are sensitive to light, to act as messengers telling them when to migrate. As the days grow longer in the spring, birds start experiencing the urge to head north. The opposite is true in the fall. As the days grow shorter, and the brain receptors detect less light, birds know it is time to migrate.

Since the summer solstice, we have already “lost” a full two hours of daylight. At our latitude, as we approach the first day of fall, we are currently losing just over two minutes of daylight every day. This significant change in day length sends a message to our migratory wild birds that it is time to head south.

For non-migratory birds, there is another change in behavior that takes place in the fall. As the days grow shorter in late summer and early fall, there are a variety of bird species that start to exhibit the behavior of “harvesting” food and caching it for the winter months ahead.

We are all familiar with mammals that exhibit this same behavior — such as chipmunks and squirrels — where they harvest food during times of plenty to sustain them during the long, cold winter months. This same principle is employed by some species of birds that have adapted so they don’t have to migrate.

Caching food is an incredible adaptation by species such as chickadees, nuthatches, jays, and nutcrackers, allowing these bird species to winter-over. As discussed in an earlier column, bird species migrate not because they can’t withstand cold temperatures. Instead, they migrate because their food source is no longer available to them.

For example, birds whose diet consists of either insects or nectar lose their primary food source once we start experiencing freezing temperatures. If jays and nutcrackers didn’t cache food, they would find it difficult to survive in the winter months.

On a completely different note — if you are interested in doing some international bird watching, I have put together a trip to Panama the end of January 2023. Ironically, it is possible that you might see some birds in Panama in January that summer here in Prescott! Contact me right away if you are interested, as there are still three openings available.

Finally, I am excited to announce the Jay’s Bird Barn 14th Annual Wild Bird Photography contest. The submission period started on Sept. 1st and continues until the Sept. 30. If you enjoy wild bird photography, I encourage you to participate. For rules and guidelines, you can either drop by the store and pick up the paperwork or visit our website at www.jaysbirdbarn.com.