Birding: Where are all of our winter birds? 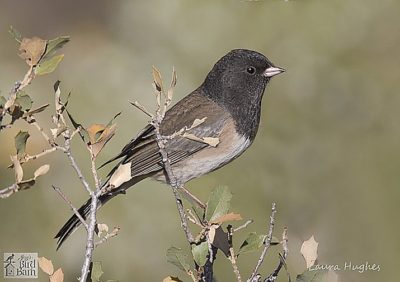 Dark-eyed juncos, a common species in North America, have been hard to find this winter. (Jay’s Bird Barn/Courtesy)

So far, our fall and winter migration activity has shown mixed results. Many of our typical winter birds are present, such as yellow-rumped warblers, ruby-crowned kinglets and white-crowned sparrows.

However, noticeably absent are dark-eyed juncos, pine siskins and Cassin’s finches. Most years I have nearly as many dark-eyed juncos frequenting my bird feeding area as white-crowned sparrows — which is a lot! This is absolutely not the case this year. Dark-eyed juncos are just hard to come by — which is quite surprising considering this is one of the most abundant bird species in all of North America.

As you might imagine, a lot of customers are asking, “Where are the juncos this year?” “Why aren’t there any pine siskins?” If I had a crystal ball, I would have definitive answers. All I can offer is my opinion on the lack of birds this fall.

Migratory birds are highly nomadic. Where birds choose to spend their winter months has more to do with food availability than with the specific location of where they winter. The location and abundance of food is not static, but is variable. Prescott is a perfect case study.

Last year, our abysmal summer monsoon rains resulted in very little natural food sources for migratory birds. The lack of local natural food sources created a situation where birds that would have normally wintered here instead spent their winter somewhere where there was sufficient food to sustain them.

Let’s fast forward to this year. Our summer monsoons were fantastic! Nature responded with a profusion of weeds, forbs and grasses, producing an abundance of natural food for wintering birds. This year, wild birds are spread throughout the region since there is plenty of natural food available to them. They are not nearly as dependent on human-provided food sources.

Additionally, we’ve had a very mild fall which means wild birds have been less stressed. However, when we receive an abundance of snow — burying all of the natural food sources —birds will show up at feeders in their desperation to find food. Birds are aware of the location of food, and if they need it, they will take advantage of it.

When times are tough—remember the major snow event we had in February of 2019 and the storm this past January where each storm produced over 25 inches of snow — birds sought out reliable, dependable food sources.

The same can be said for nectar feeders, which I discussed last week. If birds are not stressed, they will find natural food sources sufficient to sustain their daily metabolic needs. However, during a major snow event, they will be at your feeders, which will help them survive those challenging times.

Crissal thrashers, which are listed as ‘abundant’ in the Birds of Prescott checklist, are rarely seen by most homeowners. It’s not that these birds aren’t in their yard, it’s just that this species is a skulker and prefers to eek out an existence in an undetected way.

Most homeowners see this species for the first time when we have a major snow event. All of a sudden, a bird that they have never seen before shows up at their feeders. In reality, this bird has been in their yard the whole time, foraging in dense undergrowth, never to be seen.

As we move into winter, I encourage you to be consistent in your bird feeding, as it will be a safety valve for your feathered friends when they are stressed and urgently needing food.