Birding: When it comes to being observant, it pays to pay attention! 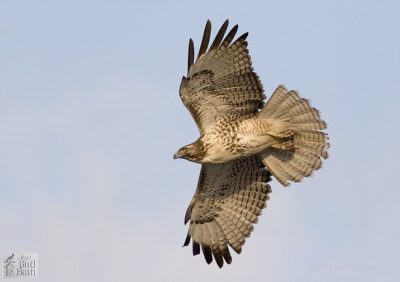 About two weeks ago, I was on my way to the mailbox when a couple of ravens flew into the area and starting raising a ruckus. Now that is not too uncommon in and of itself, but they were specifically flying around a large ponderosa pine tree in our front yard. Their incessant, agitated vocalization was not their ‘normal’ call; it was more of an alarm sound.

I finally looked up into the branches of the ponderosa pine, and lo and behold, there was a large red-tailed hawk perched in the tree. I never would have seen it had it not been for the ravens calling my attention to something being ‘out of place.’ The ravens obviously wanted the red-tailed hawk to be gone from ‘their’ tree.

This is the tree in which the ravens have nested for years and years — until this year, when a pair of great horned owls took over their nest. I don’t typically see red-tails in my neighborhood, as it is very much an urban, residential setting and is not particularly well-suited for hunting by large hawks, such as a red-tail.

Fast-forward a week. I was outside standing about 70 to 80 feet away from the ponderosa pine tree. My back was to the tree as I was engrossed in my yard work. Once again, I heard the agitated vocalization calls of ravens. Initially I didn’t think anything of it, and I didn’t react to their distress calls.

Finally, it dawned on me that something — once again — was out of place, and I should at least look to see what the commotion was all about. Turning around, I glanced up into the large ponderosa pine tree, and there was a red-tailed hawk perched in the branches. Was it the same one? I don’t know.

Perhaps there was more to the situation than I had initially thought when I saw a red-tail in the tree a week earlier. I’m rarely home during the day. Maybe the red-tailed hawk is hanging out in the tree on a regular basis, and I’m just not there to see it. Maybe the red-tail is eyeing the nest and contemplating a possible take-over. Tall trees capable of supporting a large nest three or feet in diameter are hard to come by in my neighborhood.

With such a perfect tree, and an existing nest (it will require some fixing up), maybe the hawk is hanging out in the tree in an attempt to eventually give the ravens the boot. It is not uncommon for owls to commandeer raven and red-tailed hawks’ nests. Nor is it any more uncommon for ravens to take over a red-tail’s nest than for a red-tail to take over a raven’s nest. It is a known fact that ravens, great horned owls and red-tailed hawks are mortal enemies with one another.

It could be very interesting over the next few months to see who claims the tree and the nest. I doubt the owls will use the nest again, as they experienced a nest failure earlier this year. The nest really needs some fixing up — something at which they are not very good.

At Jay’s Bird Barn, our photo contest exhibit has come down, and the 2021 winning entries are now framed and on display for your viewing enjoyment. We now have a new exhibit for your enjoyment; original wildlife art by local artist, Diane Iverson, is now gracing the walls of the store. I invite you to come see the exhibit, and perhaps make a purchase!

Eric Moore is the owner of Jay’s Bird Barn in Prescott. Eric has been an avid birder for more than 50 years. If you have questions about wild birds that you would like discussed in future articles, email him at eric@jaysbirdbarn.com.