Birding: What to do if you find a banded or tagged bird 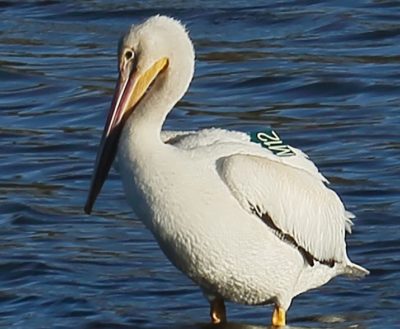 This past week I led a Jay’s Bird Barn-sponsored bird walk to Granite Basin.  It was a very quiet morning — it was challenging to rustle up any birds!  We saw a few of the more common species, such as white-breasted and pygmy nuthatches, red-naped sapsuckers, hairy woodpeckers and bushtits, but not much else.

We didn’t even see a single water bird at Granite Basin Lake.  This was very surprising to me. Normally there are at least a few mallards, maybe a coot or two, or a pied-billed grebe or a great-blue heron.

I was encouraged when we found a female Cassin’s finch.  Two winters ago, there were probably thousands of Cassin’s finches in the greater Prescott area.  However, there were very few last winter.  I’m hoping they will show up this winter like they did two years ago.

I also heard a few pine siskins in the Basin — this is another indicator species of wintering bird populations.  Interestingly, just two days later I had pine siskins in my yard at my finch feeder. I am frequently asked if lesser goldfinches stay here all winter. I consider this species to be a partial migrator — a portion of the population migrates and a portion stays. Even if your goldfinches leave, I suggest that you keep your nyjer filled with fresh seed, as pine siskins will eat at your finch feeder during the winter months.

This past week, I spent time working on my bird feeding area. I moved several feeders and I created a new brush pile for the winter months ahead. I am seeing a good variety of birds in my yard each day, including robins, both Anna’s and broad-tailed hummingbirds, yellow-rumped and orange-crowned warblers, and more white-crowned sparrows and bushtits than I can count!

I believe I have far more white-crowned sparrows this year than I had last year.  Interestingly, it seems the dark-eyed juncos are arriving later than normal this year. I just started seeing a few in my bird feeding area this past week. Usually I have just as many juncos as I do white-crowned sparrows, but not yet. I also have chipping sparrows in my yard.

As evidence of the progression of fall migration, five American white pelicans were observed at Willow Lake this past week, and one of those birds was tagged. Such large birds as condors and pelicans are tagged instead of banded.  The tag is attached to their wing, allowing citizens and scientists to track the birds’ movement.

Several local birders were able to take pictures of the tagged pelican, and one of the birders emailed a biologist in Utah to report the tag number. The biologist, John Neill, with the Great Salt Lake Ecosystem, wrote the following, “Thank you for sharing your photo and sighting of pelican M12.  It was banded as a juvenile that was too young to fly on Gunnison Island, (in the Great Salt Lake, west of Ogden) Utah on August 6, 2019. Your sighting is the first one we have received of this pelican.”

If you find or harvest a banded bird, you can report it at www.reportband.gov.  Reporting this information is helpful to biologists tracking the distribution and movement of wild birds. It is likely this young pelican can easily live another 15 to 20 years. Wouldn’t it be interesting to know all of the places it goes over its lifetime?

As a reminder, Tuesday, Oct. 22, is the last day to vote in our wild bird photography contest. We will announce the winners at noon, on Saturday, Oct. 26, as part of our anniversary celebration.