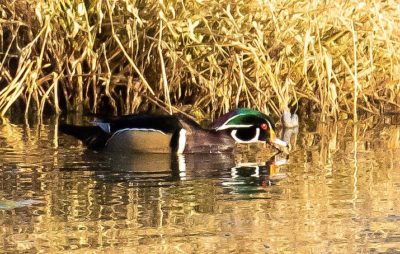 We have had such a lovely fall! Our daytime temperatures have consistently been running slightly above normal, and our morning low temperatures have been fairly mild. While it has been dry, our lack of precipitation is not unusual for this time of year, as October and November are generally dry months.

This past Saturday, I led a Jay’s Bird Barn-sponsored bird walk. We started at the wastewater ponds just off of Sundog Ranch Road, next to Prescott Lakes Parkway. We had a fruitful time birding there and saw eleven different duck species, including several male and female wood ducks. From there we moved across Prescott Lakes Parkway to the Peavine Trail parking lot off of Sundog Ranch Road.

There were so many highlights during our three-hour bird walk. I almost feel like I could compose a rendition of “The Twelve Days of Christmas” using our list of bird sightings. Among our many finds were one greater yellowlegs, two tundra swans, three western grebes, four Wilson’s snipe, and five American White Pelicans. It almost has a ring to it!

I was especially impressed by the number of shorebirds we saw for this time of year. In addition to the yellowlegs and snipe, we also saw least sandpipers, a long-billed dowitcher, and several killdeers. I am sure our mild weather has been a contributing factor in so many of these species sticking around.

The four snipes were especially exciting to see, as they were very close to the shore and right out in plain sight. Snipe are usually really hard to see (once you find them), because of their cryptically-patterned plumage. However, from our vantage point of being on the Peavine Trail and looking down on the lake, we had amazing views through my spotting scope.

Other interesting finds included a flock of ring-billed gulls and a small number of hooded mergansers. In all we saw fifty different species. I think we could have easily seen at least sixty if we had stayed out longer. There were so many different birds we missed that I thought we should have seen.

Some of the species we missed were Bald Eagle, pied-billed grebe, Cooper’s hawk, northern harrier, bridled titmouse, American robin, northern flicker, ladder-backed woodpecker, canyon towhee and many more. When I participate in bird walks, I am often more fascinated by what we didn’t see rather than what we did see.

For me, part of the alluring appeal of going bird watching is the anticipation and hope of seeing something totally unexpected such as swans, pelicans and gulls at 5,500 feet in Central Arizona! While migration should be wrapping up, it is still a great time of year to visit our local lakes to look for migratory birds. You never know what you might see!

As our thoughts are drawn to the Thanksgiving holiday this week, you may be wondering if we have wild turkeys in the area. The answer is yes! There is a pretty good population of turkeys in all of the mountain ranges surrounding the Prescott area, including Mingus Mountain, the Bradshaw Mountains, and the Sierra Prieta Mountains. A few of our customers who live in forested areas actually have flocks of turkeys that feed in their yard.

Have a Happy Turkey Day, and until next week, Happy Birding!