Birding: Vocalization mimicry can fool even the best birders 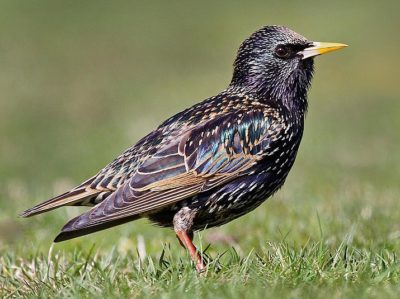 European starlings are known for their ability to mimic the vocalizations of other bird species. (Eric Moore/Courtesy)

This past week, Gayla and I visited our son, Merritt, and his family in Edmond, Oklahoma enroute to Mexico, Missouri to attend the Wild Bird Expo trade show. I’ve attended this annual trade show since 2005 to do buying for our store, and as you might imagine, I always manage to work in some bird watching along the way.

As I have been traveling to the Midwest for the last 16 years, I have become very familiar with the birds in that region. And, as an avid, life-long birder, I pride myself in being able to identify pretty much any bird I hear—simply by their songs and call notes, without even seeing the bird making the sound. Whether I’m hearing a tufted titmouse or a red-bellied woodpecker, I know and recognize all of the different vocalizations I hear as I spend time birdwatching.

However, I hate to admit, as I spent time birding in Oklahoma last week, I got faked out on more than one occasion by some very talented mimics. For example, as I was bird watching at a city park in Edmond, I heard the vocalization of a red-shouldered hawk. It was distinctive and unmistakable. But it wasn’t a red-shouldered hawk making the vocalization—it was blue jay!

How can a jay be so good at mimicking the exact sound of a bird of prey? And yet, we see examples of this behavior here in the Arizona Central Highlands. On many occasions when I’ve been bird watching in Granite Basin, I’ve been fooled by Steller’s Jays mimicking the vocalization of red-tailed hawks!

I have also been fooled on several occasions by European starlings, which have incredible ranges of vocalizations. There have been several times when I thought I was hearing a killdeer (its call notes,) but it wasn’t a killdeer at all. Rather, it was a starling making the sound. Starlings have also faked me out by producing the sounds of northern mockingbirds—which is kind of ironic when you think about it, as mockingbirds themselves are mimics!

So in reality, I was listening to a mimic mimicking a mimic. Wow, that can get confusing. Being attuned to bird vocalizations adds an additional level of birding enjoyment, where one can enjoy not just seeing birds, but also experience the enjoyment that comes from hearing the bird songs.

In addition to Steller’s jays, there are other bird species that are proficient at mimicry in the Prescott area, including northern mockingbirds and lesser goldfinches. Birds that mimic incorporate into their repertoire of vocalizations elements of other bird species songs and call notes.

Being able to identify birds by their voice is a helpful tool when I am listening to a mimic, as I can pick out all of the different bird species they are mimicking. The ability to identify the different bird calls being sung by a mimic is revealing. It is an indication that the mimic has spent time in the habitat where it has encountered the species it is mimicking, and it has learned how to reproduce the songs of other birds.

While I didn’t see anything new for my life list while in Missouri and Oklahoma, it was nice to see old friends such as red-headed woodpeckers, Carolina wrens, red-shouldered hawks, and even a scissor-tailed flycatcher.

Our 13th annual Wild Bird Photography contest is winding down. The last day to vote is Tuesday, October 26th, and we will be announcing the winners at noon on Saturday, October 30th. I invite you to come by the store, view the exhibit, and vote!