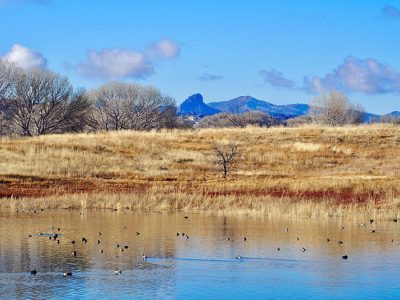 In my column last week, I shared bird identification tips. Some of my recommendations had to do with such field markings as color and beak structure. Other recommendations included behavior, size and foraging techniques. I also made the suggestion to pay attention to the habitat where the bird is observed.

Habitat is a very important piece of the puzzle when identifying wild birds. Recently, there was a picture in The Daily Courier of a bird of prey at Willow Lake labeled as a Harris’s hawk. I assume this identification was made based on field markings, without taking into consideration the habitat where the bird was seen.

If you take a look at where Harris’s hawks occur, you will discover they are common in the Sonoran Desert, where there are large numbers of Saguaro cacti. This ecosystem is referred to as an Upland Sonoran Desert habitat.

Additionally, Harris’s hawks have a unique social structure. This species of hawk hunts as a pack, and family groups stay together. When you see Harris’s hawks, it is common to see a small group of them together.

This habitat describes perfectly where the bird in the photograph was observed — at Willow Lake. In this instance, you can almost set aside other helpful bird identification tools such as size, color and beak structure, and just use habitat alone as the means for identification.

While the two species are both birds of prey, and share a unique field mark — a large white rump patch — in common, knowing that Harris’s hawks are found in an Upland Sonoran Desert habitat you could rule out Harris’s hawk as a possibility based on the fact that the bird in the photograph was seen at Willow Lake. And, knowing that northern harriers are common in a grasslands/wetlands habitat, you could be confident in your identification based on habitat.

When I teach bird identification classes, I emphasize the fact that birds are habitat-specific. To illustrate this principle, I use the example of two very different bird species — Steller’s jays and meadowlarks. Steller’s jays are found in montane forests. In the Prescott area, they are common up in the Bradshaw Mountains, in areas with ponderosa pine and fir. You would never see a Steller’s jay in a grassland habitat.

In contrast, meadowlarks — as their name implies — are found in meadows. In this part of Arizona we would refer to this habitat as a high desert grassland. Meadowlarks are very common in the grasslands around Chino Valley, Poquito Valley and near the Prescott airport. Knowing that meadowlarks spend their entire life cycle in a grassland habitat, you could be certain that you would never see one up in the Bradshaw Mountains in a stand of ponderosa pine trees.

Familiarizing yourself with where birds occur based on their habitat preference can be a helpful clue to aid you in the identification process. Learning what the preferred habitat is for individual species is acquired through time and experience in the field.

As you spend time birding, and consistently see specific bird species in a certain habitat, you can begin to categorize what bird species you can expect to see based on what habitat you are birding in. One more piece to help solve the identification puzzle.

Eric Moore is the owner of Jay’s Bird Barn in Prescott. He has been an avid birder for over 50 years. If you have questions about wild birds that you would like discussed in future articles, email him at eric@jaysbirdbarn.com.