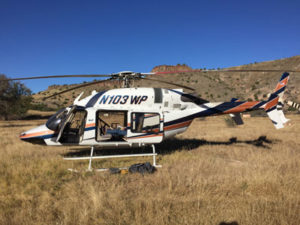 On my day off this past week, a friend and I went birding at the Upper Verde River Wildlife Area northeast of Paulden. It was another beautiful Arizona fall day with cool early morning temperatures followed by a warm, sunny, cloudless day.

The drive to the trailhead was pretty rough – it was evident that the area had received substantial rains during the monsoon season. As we hiked down into the canyon, we heard a very loud bird approaching – a big bird, one with blades! Much to our surprise, we were not the only ones visiting the Verde River that day.

We watched as the helicopter descended into the canyon below us and landed in a weedy field not far from the river. I was curious to know who was disturbing our peace, so we made our way over to the helicopter to see who they were and what they were doing. It turned out it was an SRP helicopter and crew and they were checking their monitoring stations and flow gauges. It was interesting to talk to them. I couldn’t help but think they had a dream job – flying around in a helicopter into remote wilderness areas checking on water flow.

As the helicopter flew in, we kind of thought our hopes for a good birding day were dashed as we figured all of the birds had been scared away. However, it turned out to be a really good day. There were juncos and sparrows everywhere, including white-crowned, Lincoln’s, chipping, song, rufous-crowned and vesper. There were also a lot of wrens – we heard Bewick’s wrens and we saw rock, canyon, house and marsh wrens.

There were very few yellow rumped warblers, which surprised me. We only saw one red-naped sapsucker, but there were quite a few ruby-crowned kinglets. The bird of the day, though, was the northern flicker. I can’t tell you how many flickers we saw throughout the day.

The Verde River was flowing briskly and the water was clear and beautiful. One highlight as we hiked along the river was hearing two Virginia rails calling. They were well concealed in a clump of cattails growing in the river, but we managed to get a brief glimpse of one of them – a new bird for my 2014 state list!

After we hiked out, we decided to have lunch at the trailhead parking lot. This ended up being a really good decision, as we added several more species to our day list, including both golden and Bald Eagle, northern harrier, American pipits, Say’s phoebe and western scrub-jays.

Before leaving Paulden, we checked to see if there were any recent rare bird sightings in the area. Sure enough, earlier in the day someone had posted a sighting of a Mississippi kite off Yuma Road in Chino Valley. This is a species I have pursued on several occasions this year – unsuccessfully – so we went to see if we couldn’t rustle up a kite. No luck, again. This has become my nemesis bird! However, we did see two prairie falcons!

This past Saturday, I stopped at the Watson Lake overlook off Highway 89. There had been a report earlier in the week of a common loon. This is an uncommon bird in this part of the United States, and I wanted to see if I could find it. Scanning the lake with my binoculars, it didn’t take me long to spot it, so I set up my tripod and scope to get a better look. I added yet another new species to my 2014 state list, bringing me to 263 for the year.