Birding: Up close and personal experiences with wild birds 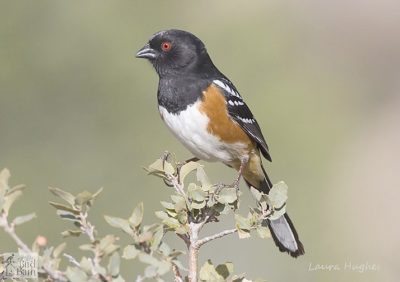 A spotted towhee dropped in for a visit last week. (Eric Moore/Courtesy)

I had two unusual experiences this past week with wild birds that decided an open door was an open invitation to come inside! The first experience occurred at Jay’s Bird Barn. I was standing just inside the entrance to the store when one of my employees was returning from taking bird seed out to a customer’s car.

As he swung the door open a recently fledged house sparrow was flying up the sidewalk, only three or four feet off the ground. As the door opened, the little bird flew directly into the store and landed on a (empty) bird bath on the sales floor! Ironically, I had seen this little bird earlier in the day down near Safeway, flying like baby birds do—wobbly and low.

I was just a few feet from where it landed, so I jumped into action. Moving slowly, I crouched down and approached the bird with two hands below the rim of the bird bath. With a swift movement I quickly raised my hands above the rim of the birdbath and successfully captured it with both hands, gently cradling the bird. Within seconds it was back outside—free as a bird!

Ironically, this is the third time, over the years, that a bird has gotten inside Jay’s Bird Barn. I have no idea how either of the other birds gained access into the store. One time we had a Bewick’s wren, and another time we had a common yellowthroat (a type of warbler) in the store. Fortunately, each of those birds were successfully caught and returned to the wild.

It was just a few days later when I had a similar experience at home. My daily routine is to arise early, and I usually wander out the front door to retrieve my copy of the newspaper. On this particular day, as I walked out the front door, I left it wide open. Only fifteen to twenty seconds passed before I returned, paper in hand.

However, as I approached the house, I started to hear a banging sound. This was confusing to me as I was the only person awake in the house. My mind was trying to process what that sound could possibly be. Directly opposite the front door, perhaps forty or fifty feet away is the back sliding door. The glass door was open, but the screen door was closed. I quickly saw the source of the sound.

An adult spotted towhee was repeatedly flying against the screen door, in an attempt to get outside. I quickly made the decision to leave the front door open and I made my way to the back door, hoping I could slide the screen door open without startling the towhee. My goal was to have it fly out the back door instead of flying into another part of the house.

I approached the door — I was only a few feet from the towhee — and, you guessed it, the bird startled, and it flew, directly out the front door. Problem solved! It was so funny to me that I would have two very similar experiences just days apart.

If you ever have a situation where a bird gets into your home, one of the best strategies is to close as many interior doors as possible to keep the bird in the main area of the house where there are exterior doors. The next step is to close all of the window shades to darken the room. Then, open the doors so the bird can see the bright daytime light outside. Typically this simple strategy is effective in getting birds back outside — where they belong!