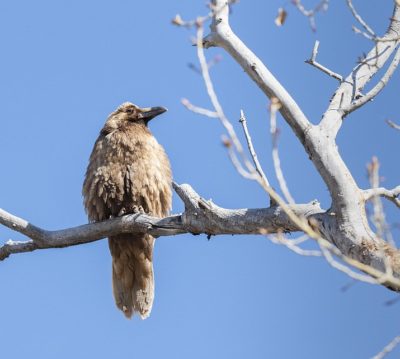 A brown-colored common raven has recently been observed along Ruth Street in Prescott. (Photo Dagny Gromer/Courtesy)

Recently I started receiving verbal communication from customers reporting they were seeing an unusually large brown bird in the area of Prescott High School, off Ruth Street. Shortly thereafter, a customer emailed me pictures of the bird in question.

What was this large brown bird?  Believe it or not, it was just a common raven.  After this report, I saw the bird for myself, in the same area.  I have seen it since then, as well. On Dec. 30, when I was in traveling, my neighbor texted me that there was a light brown raven in the ponderosa pine tree in my yard!

Even this week a customer came in and showed me a picture of the brown bird she had taken with her iPhone, asking for help identifying it. It is interesting how much we rely on color (plumage) to guide our identification process. However, when the colors aren’t ‘right,’ people get confused by what they are seeing. It is important to use other identification tools as well, such as size, vocalization and behavior.

Ironically, a similarly-colored raven was in Prescott probably 10 to 12 years ago. It was consistently observed in the area near Fry’s on Willow Creek Road at Sandretto Drive. It was accustomed to people, and was hanging out in the parking lot looking for an easy meal, and it was dumpster diving at the nearby fast-food restaurants.

Like this current incident, I started receiving verbal accounts from customers of this unusually-colored bird. At some point, a customer brought me pictures of it. The unusual plumage intrigued me, and I drove out to the shopping center to see the bird for myself. Sure enough, it was a common raven.

The simple explanation for the color variation has to do with genetics and a recessive gene manifesting itself in an unusual way. Occasionally we see examples of birds having what we refer to as leucistic traits, and sometimes we see birds that are considered a ‘partial’ albino.

Unfortunately, birds with these unusual colors and patterns do not last very long in the wild, as they really stand out. Imagine an albino house finch in the wild. It would stick out so much compared to the other birds in the same habitat. These birds have a higher predation rate in the wild since they are so much easier to see by predators looking for a meal.

I am frequently asked about some of the ‘weird’ looking ducks and geese at our local lakes. Individuals seeing these strangely-patterned ducks and geese can’t find them in their bird books, so they come to the store for identification help.

It turns out these ducks and geese are what I call ‘barnyard’ birds. They are typically domesticated birds, raised in captivity, and they have hybridized with other ducks, resulting in plumage that makes them no longer a true species, but more of a hybrid.

You might wonder how these birds end up at Lynx Lake, or at Goldwater Lake, or at Watson Lake. Unfortunately, there are individuals who owned these birds and decided they no longer wanted them, so they dumped the birds at one of our local lakes. This is illegal, and should not happen.

Anyone owning a pet, whether it is a bird, dog or cat, should pursue legal methods of finding a new home for their animals rather than abandoning them by dumping them in the wild.  It is unfair to the animal, and it creates an unnatural situation where wild, native birds are having to compete for food with birds that shouldn’t be in their habitat.