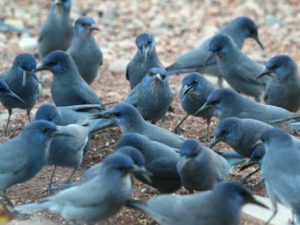 Last Saturday I led a Jay’s Bird Barn-sponsored bird walk to the Constellation Trail in the Granite Dells just off Highway 89. The trail starts in a dirt parking lot on the east side of the highway – next to the Phippen Museum – and goes under the highway through a box culvert.

Almost immediately after crossing under the highway, we started seeing western scrub jays. There are three different species of jays that occur in and around Prescott – Steller’s, western scrub and pinyon. As I pointed out the scrub jays to the group, I explained that this would be the only jay species we would be seeing on our bird walk that day.

Well, nature has a funny way of making a liar of you! It was less than a minute after I made this comment when I saw, in the distance, a flock of birds flying fairly high and headed right in our direction. There are very few bird species in the Prescott area that fly in flocks, so the behavior immediately caught my attention.

Even though the birds were a considerable distance away when I first caught sight of them, I excitedly encouraged everyone in the group to get his or her binoculars on the approaching birds, knowing that this could be something unusual. As the birds got closer, I knew instantly what they were. Not only could I see them well through my Swarovski binoculars, but as they drew closer I could hear their vocalization. It was a flock of pinyon jays! So much for seeing only one jay species!

Up until that day, I had not seen a single pinyon jay all year – in spite of all of the birding I have been doing. Ironically, the last time I did a ‘big year’ in Arizona, I missed seeing this species. If you had told me before we got started Saturday morning that we would see a flock of pinyon jays, I would not have believed you.

Pinyon jay behavior is different that our resident scrub jays and Steller’s jays. Most jays live out their entire lives within a fairly small geographical area, not ranging far from where they were raised. Pinyon jays, on the other hand, are highly nomadic – ranging far and wide is search of maturing pinyon pine nuts. Pinyon jays often occur in large flocks, sometimes numbering in the hundreds! The flock we saw was probably only about 25 birds, but it was still very exciting to see them. It was a great way start to our bird walk.

Later on, we saw a zone-tailed hawk and a northern harrier – two more good finds. After several hours of birding, we returned to our cars only to discover a common black hawk soaring directly above us as we stood in the parking lot! We also saw a red-tailed hawk, an American kestrel, canyon towhee, and both Cassin’s and western kingbirds while standing in the parking lot. It was an exciting way to finish our bird walk.

Saturday’s experience reinforced for me why people go bird watching – you never know what you might see when you get out in nature. A bit of advice – when hiking in this area, please stay on the trail and respect the privacy of private property owners.

A quick reminder – the submission period for the sixth annual wild bird photography contest ends Tuesday, Sept. 30. If you have questions about the contest, stop by the store or go to our website (www.jaysbirdbarn.com) for all of the guidelines. We would love to have you participate.