Birding: Thrashers, jays are common in the Prescott area 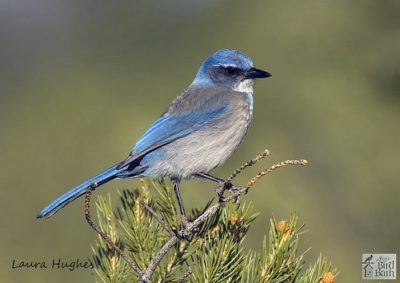 Woodhouse’s scrub-jays are a common sight in the Prescott area. (Jay’s Bird Barn/Courtesy)

I was recently asked by a customer how likely it would be to see a curve-billed thrasher in Prescott. If I had been asked this question a few years ago, I would have said it was pretty unlikely. However, over the last few years, it seems that curved-billed thrashers are occurring in the Prescott area with greater frequency.

The most common thrasher species in Prescott is the crissal thrasher, a year-round resident that is more frequently heard than seen. If you are seeing thrashers in your yard, however, you may want to check to see whether you possibly have crissal, curve-billed, or both!

How do you tell the difference? Crissal thrashers have a longer, more deeply curved bill. They also have a black malar stripe that extends from the base of the beak down the throat, and the plumage on their breast is a uniform gray color, with a rich rust color in the under-tail covert area.

In contrast, curve-billed thrashers have a shorter, less curved beak.  They lack the malar stripe, the breast has arrow-shaped spotting on the breast, and the color under the tail is a pale, buffy color.

Several years ago I saw a Bendire’s thrasher in Prescott — a species that is typically found at lower, desert elevations.  At the time, this was a new species for the Birds of Prescott checklist. There are occasional sightings of sage thrashers in Prescott in winter, and on rare occasions brown thrashers have been seen in Prescott in the winter.

The diversity of bird species in the Prescott area is truly remarkable. The Birds of Prescott checklist documents over 360 different bird species that have been seen within a 10-mile radius of the courthouse plaza in downtown Prescott.  You would be hard pressed to find that many species within a count circle of that size anywhere in the United States.

I am in Mexico, Missouri this week, attending a trade show.  This annual event provides me with the opportunity to see bird species commonly found in the Midwest, such as blue jays. There are many different kinds of jays in Arizona such as Canada jays in the White Mountains, and Mexican jays in southern Arizona. In the Prescott area, we have Woodhouse’s scrub-jays, Steller’s jays and pinyon jays.

Back in 2003, when I was writing my business plan to open a backyard wild bird store, I thought it was a clever idea to incorporate both a bird name and a family name for the name of the business—hence the name Jay’s Bird Barn.

My father-in-law’s first name was Jay, and we gave our first-born son his grandfather’s name for his middle name—Jay. A bird name for a bird store seemed fitting, and since my name is Eric, Jay sounded a lot better.

This past week, I led a guided bird walk at Dead Horse Ranch State Park in Cottonwood for an RV club that was staying there. Our morning was so engaging and enjoyable. The opportunity to help individuals create a connection to nature through bird watching is very meaningful to me.

I invite you to come to the store to enjoy the 13th annual wild bird photography contest exhibit and cast your vote for your favorite pictures.  The last day to vote is Tuesday, Oct. 26, and we will announce the winners at noon on Saturday, Oct. 30.