Birding: The intelligence and ingenuity of wild birds 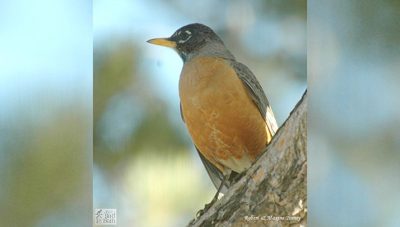 Earlier this week I witnessed an American Robin in Watson Woods that caught a lizard. (Robert J. Maxine Tinney/Courtesy)

Over the last two weeks, I’ve had several opportunities to be a bird guide — both for private parties as well as for Jay’s Bird Barn. In the last week, I have birded several times at Watson Woods and at both Watson and Willow Lakes, and it has been very “birdy.”

Spring migration is probably my favorite time of year to go birding. The arrival of our colorful neo-tropical bird species such as buntings, grosbeaks, orioles and tanagers provide a lot of oohs and ahhs for those new to birding. Participants often praise my birding skills, but it is the birds that are the stars of the show — they make me look good!

I have to admit, bird identification field guides — whether they use photographs or illustrations — do not do justice to the color of some of these birds. There is nothing like seeing a male Bullock’s Oriole or a male Black-headed Grosbeak in the sunlight.

My job as a guide is to find and identify the birds we’re seeing, but it is the birds that are in the spotlight — or should I say, spotting scope.

This week, I witnessed some bird behavior that I have never ever seen before, which is pretty amazing when you consider I have been birding for more than 55 years.

We were birding in Watson Woods, and with the naked eye I saw an American Robin, down on the ground, whacking its catch. I assumed it was an earthworm. It wasn’t until I raised my binoculars to my eyes that I saw it wasn’t an earthworm at all — it was a lizard!

I was so surprised to see a robin with a lizard in its beak! I mean, if it had been a roadrunner, I wouldn’t have thought another thing about it; but to see a robin preparing to swallow a lizard, that was very shocking to me. Last year, a Prescott birder and photographer sent me pictures of a great egret catching and eating lizards up on the rocky terrain (in the Dells) above Willow Lake.

I think sometimes, we categorize and put birds in little “boxes,” where we have expected behaviors that are known and acknowledged. Then, we see something we’ve never seen before, and it kind of rattles our cages about what we think we know.

I can remember a time several years ago when I was at Gilbert Water Ranch, and I watched a female great-tailed grackle catching fish! This was one of those “whoa” moments where you have to take stock of your knowledge of birds and reconcile what you are seeing with what you think you know about birds.

It changes. Birds are adaptable, and oh, so very smart.

Just this week I had some customers share with me an experience where they were using a live trap in their yard to catch chipmunks that they were then relocating. After a while they started to find tripped traps which should have had a chipmunk, but the traps were empty.

It was later that they witnessed, with their own eyes, a Cooper’s hawk, who emptied the trap by flipping it over, causing the door to flop open (using gravity). The hawk then reached in the open door and caught the chipmunk. How smart is that?

Another example of the ingenuity of Cooper’s hawks is how they have developed a hunting strategy of running wild birds into windows, where the bird is either stunned or killed by the impact and incapacitated. The hawk literally just flies over to the lifeless bird and picks it up and is off with its catch.

There is no question — birds have the ability to reason and solve problems.