Birding: Successful day of birding in Valley of the Sun 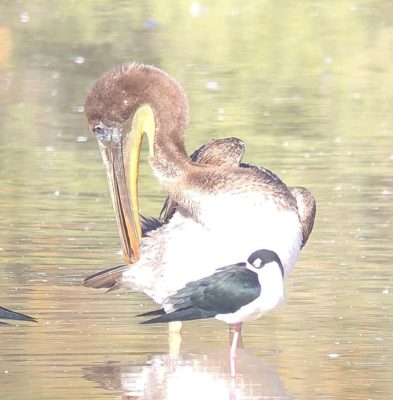 A brown pelican at the Water Ranch in Gilbert on Saturday, Jan. 16, 2021. (Eric Moore/Courtesy)

If you were to ask me, “What is your favorite birding destination in the Phoenix metropolitan area?” My answer would be the Riparian Preserve at Water Ranch, in Gilbert. Located at the intersection of Greenfields and Guadalupe, the Water Ranch boasts an impressive list of 314 documented species at this 110-acre facility.

This past weekend, I made a trip down to the Water Ranch with a few specific target birds in mind. I’d been checking eBird reports all week and had seen postings for several rare species, including brown pelican, roseate spoonbill and black and white warbler — incentive enough for me to make the two-hour drive.

I arrived just before sunrise, and it was surprisingly cold. It was also very birdy! From the minute I arrived I started checking off a list of bird sightings, including the roseate spoonbill and the brown pelican. This is the first time I had ever seen a brown pelican in Arizona, so it was particularly gratifying.

I struck out on finding the black and white warbler, but I did find a first-year northern parula warbler — which tested my bird identification skills! I wasn’t familiar with the non-adult plumage and was confused by the markings until I referenced my Sibley Guide.

Another exciting find was observing a peregrine falcon consuming its catch. It was perched on top of a utility pole, so I had a good look at it. I set up my spotting scope and used my iPhone and took a video of it eating its morning meal! I never tire of seeing peregrine falcons. After four and a half hours of birding, I finally pulled myself away in order to make one more stop before heading back.

My next stop was Granite Reef, a section of the lower Salt River Recreation area along the Bush Highway. My time was limited, but I managed to see 30 species — including two trumpeter swans — in about 45 minutes. After seeing 65 species at the Water Ranch and 30 at Granite Reef, I was on a birding high all the way home.

On a local note, the four sandhill cranes that showed up on the first day of January are still being seen daily at Willow Lake. If you haven’t yet made it out there to see them, I strongly encourage it, as it is hard to know how long they will stick around.

In my column last week, I mentioned how I have been receiving a lot of reports of hummingbird sightings. This trend has continued this week. I was in Watson Woods this weekend, and there was a male singing as if it were spring! On Tuesday of this week I saw a female Anna’s, which is very unusual in January.

My concern for all of these hummingbirds is the weather forecast for this weekend. With the possibility of quite a bit of snow (whether that happens or not remains to be seen), I would encourage you to monitor your feeders to make sure the nectar is accessible to the birds. You might want to have a feeder inside to swap out with your outside feeder every few hours in case it gets buried with snow.