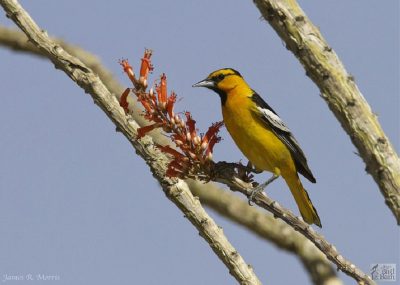 Orioles, such as the male Bullock’s oriole are starting to show up in the Arizona Central Highlands. (Eric Moore/Courtesy)

Spring migration is in full swing, and nowhere is this more evident than at our local lakes. Both Watson and Willow lakes are designated by the National Audubon Society as “Important Bird Areas.” Our local lakes are used by thousands of migratory birds each year as a place to feed and rest.

For example, a shorebird wintering over at Patagonia Lake in southern Arizona might make several stops in the state as it moves north. This is a totally hypothetical example, but a migratory bird such as a spotted sandpiper, upon leaving Patagonia Lake might only fly as far north as Sweetwater Ponds in Tucson for the first leg of its journey, stopping there to rest and refuel.

Areas where birds can rest and refuel are critical to a successful migration. This is true of songbirds as well. When they stop to rest, they need an area that is rich in terms of habitat and food, primarily insects. This is a great segue into a very important topic — the use of pesticides.

Our youngest son was home this past weekend, and he commented on the number of lizards we have in our yard. My immediate response to him was, “that’s because we have a lot of insects.” In order to have a biologically diverse yard, it is important to protect each niche of the food chain. If you want a healthy yard, insects are a key ingredient in achieving this goal.

Migratory birds — such as Wilson’s warblers, which are non-seed eaters — need insects when making pit stops along their migration route. You might have a yard full of seed feeders, but this doesn’t provide a benefit to insect-eating varieties of birds. An abundance of insects is critical to wild bird migration. For a minute, I’ll get on my soap box — I strongly discourage the use of pesticides in your yard!

Several customers have emailed me this past week letting me know orioles have arrived. Orioles are not seed-eaters either, so, like other migratory birds, they are dependent on insects. There are three species of orioles that frequent the Prescott area, either as transients or as spring and summer residents and breeders. The most common oriole species in this area is the Bullock’s, followed by Scott’s and hooded.

In addition to insects, orioles are attracted to oriole feeders and frequently visit hummingbird feeders for sugar water. If you see this behavior, it is not unusual. In fact, it is normal. Other human-provided food sources to attract orioles include grape jelly, mealworms and fresh fruit — especially oranges, cut in half and placed around the yard.

Orioles make an intricate hanging nest using plant fibers, horse hair, human hair and, sometimes, man-made materials, such as bailing twine and other kinds of string. Several years ago, a customer brought into our store an oriole nest that was ‘stitched’ into the fabric of an American flag. It is a priceless example of the ingenuity of birds. If you want to see it, we have it on display.