Birding: Spring is in the air and wild birds are on the move 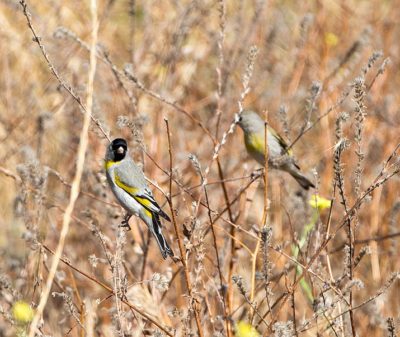 Hummingbird sightings continue to come in.  Since last week, I’ve had reports of four different species at backyard bird feeders — Anna’s, rufous, broad-tailed and black-chinned. If you haven’t put out a hummingbird feeder yet, I’d suggest getting at least one feeder up right away, if not more.

I was at Watson Lake this past weekend, and was impressed by both the number and variety of waterfowl still present. This is the time of year when many of our wintering-over duck species start to thin out as they begin moving north. I was pleased to see some dapper-looking redhead ducks — the first I’ve seen for the year. I also saw four wood ducks preparing to roost for the night, perched high up in the trees surrounding the pond in Watson Woods.

There were also hooded mergansers on the lake, and a raft of eared grebes. I didn’t get an exact count, but there was an impressive number of them, perhaps 50 or more! There were also both green-winged and cinnamon teal, along with shovelers, ruddy ducks, mallard, gadwall and bufflehead.  I didn’t see any wigeon, pintail or ring-necked ducks.

I was also delighted to see a single osprey, a species I don’t see very often in Prescott. As it flew over the lake, his presence struck fear in the hearts of the ducks and sent them flying to escape this fearsome predator. In reality, the osprey probably wasn’t interested in the ducks, but the ducks have no way of knowing that. I’ve read that 97% of an osprey’s diet is fish!

As the days continue to get longer, our winter visitors get restless and start feeling the urge to move north for the summer. This is a great time of year to visit our local lakes, as the types of birds that occur at our lakes can change from one day to the next.

The water level at Watson Lake is high this spring, so it really isn’t a great habitat for short-legged wading birds. During migration we frequently get a variety of shorebirds, including sandpipers, snipe, dowitchers and more. This year, shore birds will find Willow Lake better suited to their foraging technique of probing in shallow water for invertebrates.

In addition to Watson Lake being productive, Watson Woods has been very birdy as well. Earlier this week, I observed several mixed flocks that were actively foraging for food. Interestingly, several of the bird species in the flock — in spite of being either foliage gleaners or bark gleaners — were down on the ground!

This included a pair of white-breasted nuthatches, several yellow-rumped warblers and western bluebirds that were hopping on the trail. It is a rare occasion to see nuthatches down on the ground. They are usually shimmying up and down the trunks of trees looking for insects. I suspect, based on observing their behavior, that they were looking for suitable nesting material to put into their nesting cavity.

Other species in the mixed flock included bridled titmouse, chipping sparrow, house finch and spotted towhee. While visiting Watson Woods, I was excited to find a pair of Lawrence’s goldfinches — again. I saw some last week near the creek. This time I found them feeding on weeds adjacent to the parking lot at the trailhead at the intersection of Highway 89 and Rosser.

Lawrence’s goldfinches are a rare visitor to central Arizona. They show up — infrequently — at backyard bird feeders, unlike their close relatives, lesser goldfinches, which are common at backyard seed feeders.

As migration gets underway, be on the lookout for new birds in your yard. Until next week, Happy Birding!

Eric Moore is the owner of Jay’s Bird Barn in Prescott, Arizona.  Eric has been an avid birder for over 50 years. If you have questions about wild birds that you would like discussed in future articles, email him at eric@jaysbirdbarn.com.