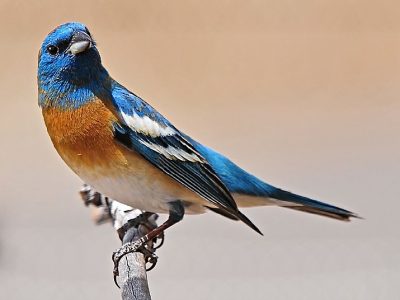 Be on the lookout for lazuli buntings over the next few weeks as they migrate south through the Prescott area. (Jay’s Bird Barn/Courtesy)

I need to start this week’s column by correcting an error in my column last week. I mentioned how disappointing last year’s monsoon season was. I meant to refer to the 2020 monsoon season, not 2021.

This past weekend I spent quite a bit of time in Watson Woods Riparian Preserve, chronicling the impact of our summer monsoon rains. Last Friday night the Prescott area enjoyed a torrential downpour, resulting in tremendous runoff.

The main channel for Granite Creek, in Watson Woods, is generally very narrow. However, last Friday the river was up over its banking and was at least 150 feet wide in places!

This single weather event dramatically impacted the water level in Watson Lake. From Friday to Sunday, the lake went up several feet. On Saturday morning, I checked to see if the level of the lake was high enough for water to reach the cross-cut channel in the northwest corner of the lake.

Growing up in Tucson, I had many experiences where I witnessed flash floods. These experiences influenced and shaped my interest in weather and turned me into a stream chaser. Interestingly, my favorite class in college was on meteorology and climatology. Why not ornithology? Because I’ve never had a class in ornithology!

At our home in northwest Tucson, there were two dry washes that converged directly behind our house. After a heavy monsoon storm, I would stand on the banking of the wash and wait for the water to start flowing in each of these two, normally dry washes. To this day, I love watching dry creeks come to life.

While spending time in Watson Woods Riparian Preserve this past weekend, I heard the sweet song of several lazuli buntings. Knowing that lazuli buntings are back is an indication that migratory bird species are heading south. Each spring we get a good number of buntings passing through Prescott on their way north. Then, in August and September, we see them again (briefly) on their return trip to their wintering grounds.

I have also noticed an increase in turkey vulture numbers this past week — another indication that fall migration is underway. This past Saturday, I spent several hours outside doing yard work and saw several small groups of turkey vultures making their way south.

At one point I heard the “harassing” vocalization of a raven. Ravens love to harass large birds of prey that they feel are a threat to them, such as red-tailed hawks and golden eagles. After listening to the harassment for a while, I gazed in the distance to see the raven dive-bombing and generally harassing what appeared to be a turkey vulture.

However, it dawned on me that ravens don’t harass vultures. That is just not something they do. Ravens don’t see vultures as a threat, so there’s really no motivation for them to expend a lot of energy harassing them. Once that thought sunk in, I grabbed my binoculars and discovered that the bird being harassed was not a vulture, but a zone-tailed hawk!

Be on the lookout for migratory birds and until next week, Happy Birding!