Birding: Sandpiper ID ‘workshop’ brought to you by migrating birds 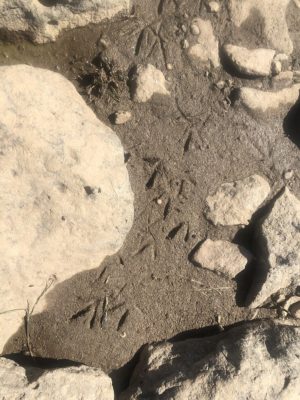 Sandpiper footprints in the mud at the margins of Watson Lake. (Eric Moore/Courtesy)

Last week, the title for my column was “Fall migration is in full swing at our local lakes.”  As I was writing my column this week, I realized I could have used the same title again!

This past week, I have personally witnessed the impact of fall migration at several of our local lakes. Over the weekend I visited Willow Lake three times, and I visited Watson Lake, Goldwater Lake and the wastewater treatment plant on Sundog Ranch Road once each. It was fascinating to see how different migratory bird species showed up each day.  I saw different species on Saturday than I saw on Friday, and different species on Monday from what I saw on Saturday.

On Friday, I birded the east side of Watson Lake from the vantage point of the Peavine Trail. When birding Watson Lake in the morning, it is best to bird from the east side of the lake so the sun is at your back. Using my 95-millimeter Swarovski scope made all the difference in the world, as birds on the lake and on the mudflats were pretty far away.

The higher magnification that a scope provides makes a big difference when attempting to see subtle differences in plumage and coloration.  Identification of shorebirds in the fall can be tricky, as many migrating birds have already molted from their breeding plumage to their fall/winter colors — which tends to be more drab and subdued.

The water level at both Watson and Willow lakes is pretty low right now, so there are exposed mudflats that are being used by a variety of long-legged migrating shorebirds. At Watson I saw white-faced ibis, American avocets, killdeer, least sandpipers, western sandpipers, spotted sandpipers, Wilson’s snipe and Wilson’s phalarope. Each of these species feeds either on mudflats or in the shallow margins along the shore.

In addition to the many different types of water birds, I also saw a lot of migratory birds in the chaparral habitat that parallels the trail, including a vermilion flycatcher and my first sighting of a white-crowned sparrow this fall, along with migrating green-tailed towhees, Wilson’s warblers, yellow-headed blackbirds and bank swallows.

When I left Watson Lake, I drove directly over to Willow Lake and was again impressed with the variety of shorebirds that were present, including black-necked stilts, American avocets, killdeer, Baird’s sandpiper and pectoral sandpiper.

On Saturday, I visited the wastewater treatment facility on Sundog Ranch Road and saw a ring-necked duck, a few American wigeon and several northern shovelers.  Just a few days earlier, none of these duck species were at this location.  I also watched a peregrine falcon do a fly-by — it certainly got the attention of the birds feeding there! Yes, migration is in full swing.

As a reminder, the month of September is the submission period for our 12th annual Wild Bird Photography Contest. If you have questions, come by the store to pick up a flyer or go online at www.jaysbirdbarn.com for more information. The deadline to submit pictures is Sept. 30.