Birding: Resources for individuals growing in the hobby of bird watching 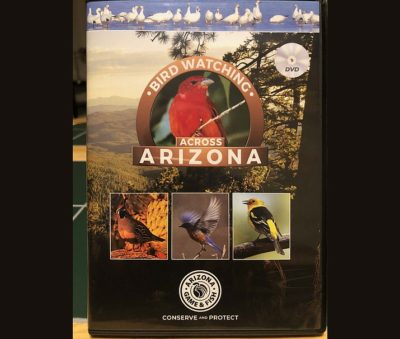 Earlier this year, the Arizona Game and Fish Department created a film titled, “Bird Watching Across Arizona,” that originally aired in March on Arizona PBS Channel 8. This film is now available on DVD, and is a great introduction to birding in Arizona. (Eric Moore/Courtesy)

I count myself fortunate to have grown up as a birder. I don’t remember the “moment” when I got turned onto birds, but I tell people I started bird watching when I was 5 years old! In reality, it could have been earlier. I don’t know for sure, as I can’t remember anything before then!

Growing up, I never dreamed of traveling to far off places such as Africa, Brazil, Costa Rica and Belize—a few of the places where I have gone bird watching. I doubt I would have visited any of these places if it wasn’t for my love of birding.

I feel blessed that not only did I have a love of birds at a young age, but it was especially fortuitous that I grew up in Arizona. The state of Arizona is considered one of the best places to bird watch in the continental U.S. Birders use an expression called “species richness” to refer to the diversity and quantity of bird species found in a given area.

It just so happens that the state of Arizona has the third highest species richness of any state. Only two states have a greater variety of bird species than Arizona—California and Texas. These two states also have extensive coastline. The fact that Arizona comes in at number three is really remarkable considering we have no coastline.

Fortunately, there are many resources available to new birders—tools to help individuals deepen their connection to wild birds and to nature as a whole. Earlier this year, the Arizona Game and Fish Department created a film titled, “Bird Watching Across Arizona,” that originally aired in March on Arizona PBS Channel 8. This film is now available on DVD, and is a great introduction to birding in Arizona.

As you start to learn about birds, you begin to understand the interdependence of nature. A bird’s needs aren’t much different than our own. Birds need food, water, shelter, and places to rear young. Birds need native habitat with plants that act as a smorgasbord—providing food such as seeds, nuts, nectar and acting as a host for insects that make up a huge part of their diet.

I invite you to take advantage of some of these resources to help you grow in your love of wild birds. Who knows what impact bird watching may have on you? I believe that this hobby will enrich your life.