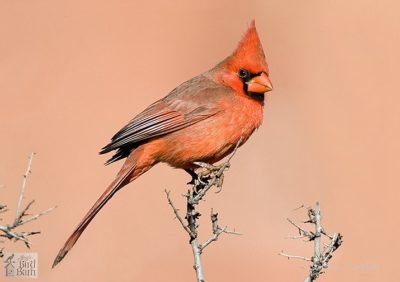 We wrapped up our visit to our son, Jeremy, and his family in Virginia this past week. While we were back East, we swung through Maryland and spent a little time in both Delaware and New Jersey.

Living in the West for most of my life, it is hard to imagine being able to visit four states in one day — unless you’re visiting Four Corners! However, driving through four states in the east in one day is pretty easy to do.

It is not uncommon for people to create a bucket list for their lives — a vision of what they would like to do or accomplish in their lifetime. Several years ago, I came up with what I considered a novel bucket list idea: to see every state bird in the state where it is the state bird. I even created a four-column spreadsheet in Excel to document my progress — a column listing all of the states, their respective state bird, the date observed and the location of the observation.

I have to admit, this is a rather ambitious goal. It requires visiting all 50 states, which will take a lot of time and effort. Being back East this past week, I thought I could maybe knock out a few of the state birds; it seemed simple enough.

I was disappointed to find out that this species is not even listed in iBird Pro! The app only lists species found in the wild — not in captivity. How could I see the state bird if it is a domesticated chicken?!! Well that certainly was a conundrum. I never did figure it out, so I guess that means I’ll have to go back someday.

I found out that the state bird of New Jersey is the American Goldfinch. What a relief. That would be simple to find, right? Wrong. I struck out. I never saw a single one. Wow, who would have thought finding an American Goldfinch would even be a challenge? That means I’ll have to go back to New Jersey someday.

Moving on to Maryland, I researched the state bird and found out it is the Baltimore Oriole. Logical enough, since Baltimore is located in Maryland. The only problem was the fact that Baltimore orioles are a migratory species — they breed in North American in the April-September timeframe and winter in the Caribbean and in Mexico. Since it is January, I had no hope of seeing Maryland’s state bird. Struck out again.

Fortunately, seeing Virginia’s state bird was easy, as it is the northern cardinal. Cardinals are super abundant throughout Virginia, and they are a permanent, year-round resident. Of the four states we visited, I got one state bird. This is certainly not what I had anticipated.

My bucket list effort led me to another thought as I reflected on how many sports teams use birds for their mascot — like the Baltimore Orioles baseball team, or the Baltimore Ravens football team.

Our Arizona Cardinals team inherited its name from where they used to play. Just think, if the Arizona Cardinal football team had its origins in Arizona maybe they would have been named the Arizona Cactus Wrens, after our state bird.  When I attended Lulu Walker Elementary School in Tucson, our mascot was, ironically, the cactus wren.