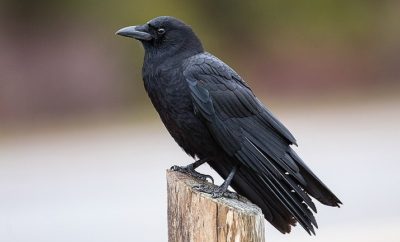 On Monday, Jan. 31, I was making a birdseed delivery to a customer who lives in the Dells. Her yard is incredibly birdy, and I always enjoy delivering seed to her home. As I was leaving her home, I heard the unmistakable sound of vocalizing white-throated swifts, flying overhead.

I immediately looked up, and, sure enough, three swifts were flying back and forth in front of the imposing granite rock formations right out her front door. It was such a surprising discovery! In the previous 30 years I have lived in Prescott, I had never seen a white-throated swift in January. White-throated swifts are a common spring and summer resident in the Prescott area —particularly in the Dells — but not a winter resident.

Swifts are similar to swallows in the sense that they are an aerial gleaner. Their diet is flying insects, so the only way they can feed is when they are flying. Swifts do not foliage glean for insects, as do warblers. As you can imagine, there are not a lot of flying insects around in January, especially when you consider how we had several consecutive days this past week with early morning temperatures in the teens.

There are not a lot of insects that can survive these kinds of temperatures. This is why most insect-eating varieties of birds migrate. Once we begin to experience freezing temperatures each fall, these birds’ preferred food source is no longer available to them, so they head south to warmer climes.

Probably not more than 20 minutes after leaving the customer’s home I arrived at our store location on Willow Creek Road, where I heard the unmistakable sound of a crow. Not a raven, but a crow. I looked over in the direction of the sound, and sure enough, there was an American Crow perched on the ledge of Cal-Ranch.

I literally ran into the store and grabbed a pair of binoculars out of the display case, and yelled at the employees on the sales floor to come join me outside to see a crow. Now most people probably wouldn’t get as excited as I was about seeing a crow, but truthfully, this is only the third time in 30 years I have seen a crow in Prescott.

As I walked across the parking lot, I pulled out my phone, and started shooting a video, getting closer and closer to it as I walked. Ironically, the crow flew and landed on the edge of Beall’s, right next to a raven! It was really nice to not only hear the difference in vocalization, but to also see the significant difference in size between the two species.

When I came back into the store, I got onto my computer and logged my sightings into eBird. As I imagined, white-throated swift did not show up on the checklist without clicking on the “show rarities” option. Rare bird sightings require additional documentation, such as a written description and possibly a sketch, photograph or a recording.

I had to create a separate eBird checklist for the crow sighting, as bird observations recorded in eBird are entered by location. I was surprised when I pulled up the checklist for the store location — American Crow was on the list! According to eBird, it is not considered rare for this location. In my opinion, I would think American Crow should be listed as “rare” for Prescott.

I have had a lot of interesting bird sightings at our store parking lot over the years. Most often, however, I just see the usual, common parking lot birds, such as common raven, rock dove, house sparrows and, occasionally, a great-tailed grackle.