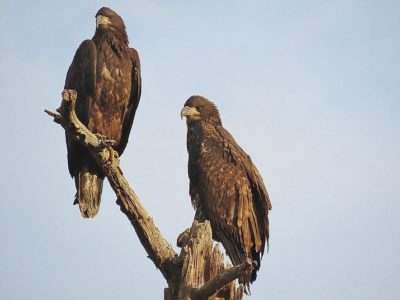 Two juvenile Bald Eagles are now out of the nest at Lynx Lake. (Everett Sanborn/Courtesy)

As migration activity winds down in the spring, and bird species move into their summer range, they begin to pair up. Each pair chooses a territory of sufficient size to support their efforts to rear their fledglings. Small songbirds, feeding on insects, need a much smaller territory compared to a Cooper’s Hawk feeding mostly on birds.

However, once the pair has successfully raised their young, their territorial behavior breaks down. The expression of being an ‘empty nester’ is very literal for wild birds. Once the nest is empty, the adults are no longer bound to their territory — they are free to wander and go about their lives.

This behavior — of adults occurring in areas outside of their breeding habitat — is referred to as post-breeding dispersal. The time frame for this behavior throws people off guard when all of a sudden birds start showing up in their yard that normally wouldn’t be there.

I am certainly witnessing this in my neighborhood and yard. On Sunday, I was out on the back patio when I first heard (and later saw) a beautiful male western tanager. This is certainly not a species I would expect to have in my yard this time of year. Western tanagers usually breed in a high-elevation montane forest with fir and quaking aspens, yet there was a male in my yard.

I’ve also noticed the last few days that I have been hearing a cardinal singing in my neighborhood, as well as blue grosbeak and white-breasted nuthatch. Each of these examples is an indication that birds are already on the move — dispersing after they have finished rearing their young.

Within the next week to 10 days, folks in the Arizona Central Highlands will start seeing male rufous hummingbirds in their yard — another indication of post-breeding dispersal. Males have finished their parental duties and are already starting their southward journey.

Another species that has started showing up the last few weeks is the phainopepla. Not familiar with phainopeplas? The males are a shiny, glossy black color, with prominent white patches in their wings (visible only when they are in flight) and a ragged crest. Some folks call it a black cardinal, but it is not in the cardinal family at all.

On a different note, I wanted to share some really exciting news about the nesting pair of Bald Eagles at Lynx Lake. This year’s pair has successfully raised two juveniles that have recently fledged (left the nest). Both of them are being observed daily flying around the lake, perched on some of the large dead snags, and even perched on the dam.

This is great news for our local Bald Eagle population after last year’s nests failure, with no chicks fledging. This is the closest pair of nesting Bald Eagles in the Prescott area, with another pair north of Chino Valley in the Del Rio Springs area. If you go to Lynx Lake to look for the juveniles, they are entirely dark brown. They will not get their adult plumage of a white head and tail until they are five years old!