Birding in the Pacific Northwest 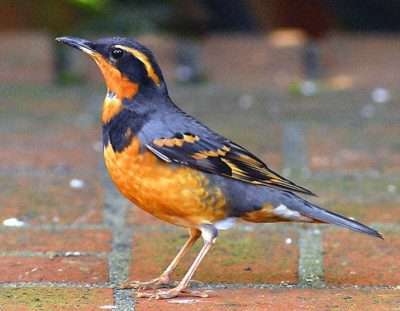 Greetings from Renton, Washington, just south of Seattle! Gayla and I were blessed with two new beautiful granddaughters in October—one in Virginia, and one in Washington. Gayla and I flew to Seattle this past week to visit our son, Merritt, and his family for the Thanksgiving holiday and to meet our newest granddaughter, Charlotte.

Of course, being in Washington has provided me with the opportunity to go bird watching and see birds that don’t occur in the Central Highlands area of Arizona. I have gone birding almost every day, even when it was raining—which has been most of the time.

I have spent a considerable about of time at the Soos Creek Trail, Cedar River Trail, Saltwater State Park, Des Moines Marina, and the Green River Natural Resources Area. One day we took the ferry from Seattle over to Bainbridge Island. That same day, we hiked the Snoqualmie Falls Trail—what an impressive sight! The sheer volume of water going over the falls each second is mind-boggling. It goes without saying that my binoculars have been my constant companion on all of these excursions, and I have really enjoyed the different bird species I have seen here.

In 1999, I spent six months working in Bellevue, so I have birded in the Seattle area in the past. This week I have been working on a list of ‘target’ birds I was hoping to see. One of them was a varied thrush, which is similar in size and is a close relative to the American robin. It is almost like a mythical bird—one that I know is here, and is probably even considered abundant, yet is it quite elusive and difficult to see.

I have seen a varied thrush on two occasions this week—and both times it was as if the bird just magically appeared out of nowhere. How this happens I don’t know, so I can’t even attempt to describe how it suddenly was right in front of me. Each time I saw the thrush, I was nervous to even raise my binoculars to my eyes fearing that any movement I made might scare it away.

As I birded several consecutive days in the same habitats, I saw the same varieties of birds each day, such as red-breasted sapsucker, Pacific wren, chestnut-backed chickadee, golden-crowned kinglet, golden-crowned sparrow and fox sparrow. I knew if I wanted to see a wider variety of birds I needed to spend time in a different habitat.

At that point, I decided to use the Cornell Lab of Ornithology’s eBird software program to look up recent bird sightings in the area. This helped guide me in my decisions as to where to go bird watching. It was obvious that my greatest opportunity to see different varieties of birds was to head to Puget Sound.

Water birds are not my strength, having lived most of my life in Arizona, but it has been a good test of my birding skills, knowledge and ability. I saw hooded, common and red-breasted merganser; red-necked, horned and western grebe; Barrow’s and common goldeneyes; and surf and white-winged scoters; and the list goes on and on.

Of all the birds I saw in the Sound, the one species that was more striking than any of the others was harlequin ducks. The plumage of the males is just so amazing. One last note—Bald Eagles are probably as common here as are red-tailed hawks in Prescott. I have seen Bald Eagles every day, which has been a special experience.