Birding: Normally quiet owls are dueting back and forth 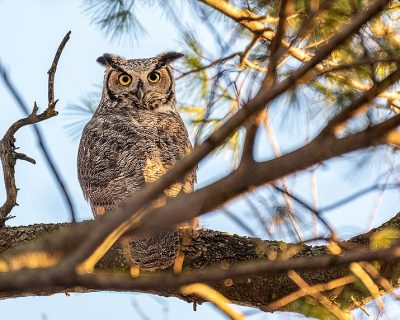 Over the last few weeks there has been a pair of great horned owls in my neighborhood that have been hooting up a storm. Their behavior has been somewhat surprising to me. First, it seems too early, as breeding season is still two months away; and second, they are vocalizing at odd times of the day.

Owls are generally quiet during the day. However, this particular pair vocalizes in the middle of the day, before sundown, and early in the morning. They are very chatty compared to most owls.

A pair of great horned owls nested in our yard last year but were unsuccessful in raising their brood to maturity. I’m not sure why they experienced a nest failure, but I do know that the nest started to fall apart.

The owls usurped the nest from a pair of ravens that have been using the same nest for at least sixteen years. With the nest in a state of disrepair, I figure the owls won’t attempt to use it again. I have wondered whether the ravens would come back and rebuild the nest, but that has yet to happen.

On a different topic, we usually think of migration as being more of a spring and fall event, not something that occurs outside of the “normal” time frame. We also think of migration as being a latitudinal event, where birds move hundreds—if not thousands—of miles in a north to south and south to north pattern. However, there are bird species that engage in a much shorter migration route, referred to as elevational migration.

There are many varieties of birds where the timing of their migration is affected by either weather or food availability. For example, birds that summer at high elevations and may not move until winter snowfalls cover their natural food sources, forcing them to move down in elevation.

For example, there are bird species that spend their summer months at 8,000-9,000 feet in elevation. Instead of traveling a great distance to migrate, they just drop down in elevation, say to 4,000-5,000 feet and get the same benefit of migrating. At lower elevations the temperatures are more moderate, and food sources are more accessible and abundant.

In the Prescott area, there are two species that quickly come to mind that summer-over at higher elevations, and winter at lower elevations: Townsend’s solitaire, and western bluebirds. Over the last few weeks, I have seen several solitaires in town, and have seen flocks of bluebirds at my home.

Neither of these species are seed eaters, so you won’t see them at your feeders. However, if you have a source of water and berry-producing shrubs and bushes, you are likely to see them in your yard.

A lot of our customers focus on the birds they are seeing at their feeders. Chances are there are many more varieties of birds frequenting your yard than you realize. You just need to look for them in the foliage of your yard, not at your feeders.

This evening, Thursday December 1st, at 7:00 p.m., the Natural History Institute Speakers Series is hosting a presentation titled, “Venom, scales, and sticky toes: Adaptations of amphibians and reptiles in Arizona.” The event is free, but space is limited, and registration is required to attend (info@naturalhistoryinstitute.org).

This is a great opportunity to learn what is so special about reptiles and amphibians in the first place, and why conditions in Arizona have allowed them to diversify in so many marvelous ways. The meeting takes place at 126 N Marina St. in Prescott. I hope to see you there.