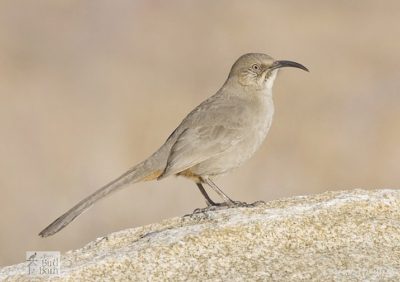 Our home here in Prescott is just off of Rosser Street and borders a seasonal creek. The habitat along portions of the creek is full of native trees and shrubs.

Some areas along the banking are so thick with dense vegetation that you can’t even walk through it. Some of the plants growing along the creek include desert hackberry, three-leaf sumac, scrub oak, juniper, pinyon and even some ponderosa pine.

Interestingly, in spite of hearing a crissal thrasher from time to time, I have never seen one in my yard. All of that changed on Saturday. I was out in the front yard moving some potted plants, when I spotted one at the bird bath. I literally froze in my tracks, flower pot in hand.

With the naked eye, I was sure it was a crissal thrasher — but my binoculars were in the house.

The thrasher sat on the rim of the bird bath for at least 30 to 45 seconds, so I decided I’d make a run for my binos. I set the pot down, dashed into the house, grabbed my binoculars, and when I got back it was still on the bird bath. Yep, it was definitely a crissal thrasher.

How exciting, after 14 years to see one in my yard!

It really put on a show too—after getting its fill at the bird bath, it flew up to a large platform seed feeder that I have mounted on a 4-by-4 post.

After a while, it went from the platform feeder to a suet feeder and hammered away at the suet before dropping down onto the ground to do some ground feeding under the bushes in my bird feeding area.

Not familiar with crissal thrashers? This is a species typically found in chaparral, pinyon and juniper habitats. Believe it or not, in the ‘Birds of Prescott, Arizona’ checklist by Dr. Carl Tomoff, this species is listed as both ‘common’ and ‘abundant’. You may be wondering why, if this bird is both common and abundant, I have never seen it in my yard? After all, it is a good sized bird — about the size of our scrub-jays.

The best explanation for not seeing this bird is because they are skulkers. They hide in dense vegetation and feed under low-growing bushes instead of being out in the open like their first cousin, the curve-billed thrasher, which is so common in the Sonoran Desert. About the only time they are out in open is when they are actively singing.

Another observation I made this week, is the realization that I don’t have any hummingbirds hanging around. I generally leave the house pretty early in the morning, and I frequently don’t get home until sundown, so it is hard for me to know whether I still have any hummingbirds or not. After watching my feeders intently over the last two weeks, I’ve come to the conclusion that my hummers are gone, and I don’t need to have any feeders out until they come back.

If you continue to see hummingbird activity in your yard, I’d suggest buying a few eight-ounce feeders and swap them out when we have freezing temperatures so the food is accessible to the birds.