Birding: Nesting season is fraught with a lot of challenges 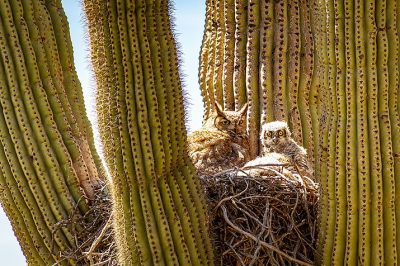 Nesting season has already been underway for several months for many early nesting bird species such as bald eagles and great-horned owls. Even some of our smaller song birds start nesting in February and March. Different species nest at different times, based on a number of factors such as elevation and latitude, migration, food availability, and the size of the bird.

Species occurring further south and at lower elevations nest earlier than species at northern latitudes and at higher elevations. There are several reasons for this. Typically, habitats that are either lower in elevation, or further south—or both—experience warmer weather, which increases the availability of food.

Consider Anna’s hummingbirds, a common species in Arizona. Down in Phoenix, this species starts breeding as early as late December and early January. The weather is sufficiently mild, so there is an abundance of insects and flowering plants.

However, here in the Central Highlands, Anna’s hummingbirds don’t breed until much later due to our colder temperatures. Our higher elevation, with its accompanying freezing temperatures, is not suitable for an abundance of insects or flowering plants in January!

Species that don’t migrate tend to breed earlier than species that do migrate. For example, mourning doves are present in the Arizona Central Highlands year-round. Since they are already here in February, they can start building nests and laying eggs. By contrast, black-headed grosbeaks don’t show up until the April-May time frame. They don’t start the process of nest building and egg laying until after they’ve finished their spring migration.

Many species time their breeding to coincide with the availability of food needed to raise their fledglings. For example, most seed-eating bird species switch their diet to insects in summer, as this is what they feed their babies. Generally, insects are not available until the threat of hard frosts has passed. Breeding later ensures a sufficient supply of food to raise a nest full of hungry baby birds.

SIZE OF THE BIRD

The one and only nesting pair of Bald eagles we have in Prescott suffered a catastrophic loss earlier this year, after they had laid their eggs. The tree their nest was in (at Lynx Lake) blew down, destroying the nest, eggs, and any hope of a successful breeding season. The nest failure occurred so late in the season it was too late for them to start over, so they will not breed again until next year. This is a terrible loss for our local eagle population.

Recently I witnessed the nest failure for a pair of great-horned owls in Watson Woods. The owls were using an old common black hawk’s nest in a large cottonwood tree to the south of the Prescott Lakes parkway bridge. I checked on the nest every day, and saw the female (presumably) sitting on the nest, incubating her eggs.

One day last month we had a tremendous wind storm that broke off a large tree branch and it landed directly in their nest. As a result of the damage to the nest, the owls abandoned the nest site. This nest failure also means it will be another year before they will try again.

Each of these examples point out some of the perils associated with nesting. Nesting birds are subject to disturbance by humans, natural disasters, and predation from predators. When I reflect on all of the challenges facing wild birds, it is remarkable that so many of them successfully raise a brood of chicks to maturity.

Eric Moore is the owner of Jay’s Bird Barn in Prescott, Arizona. Eric has been an avid birder for over 50 years. If you have questions about wild bird that you would like discussed in future articles, email him at eric@jaysbirdbarn.com.