Birding: Nesting GHO in my yard 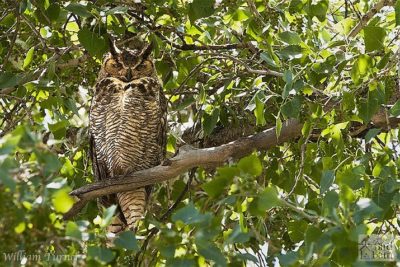 Over the years I’ve written on several occasions about the ravens that nest in our yard each year. While we live right in town, just off of Rosser Street, we are blessed to have a giant ponderosa pine tree in our yard, which is not a common tree in my neighborhood. The ravens have a bulky, stick nest just below the crown of the tree that they refurbish and use year after year.

From time to time I’ve also written about a pair of great horned owls that show up in January and attempt a coup to take over the ravens nest. It is not unusual for great horned owls to use either a red-tailed hawk’s nest or a raven’s nest to rear their own young. For the last 14 years, the ravens have maintained control of the nesting site.

About six weeks ago the owls showed up, and were very vocal for a few weeks as they hung around several yards adjacent to ours. Unfortunately, I am not at home a lot, so I think I have missed a lot of the fireworks between the ravens and the owls as their feud has played out over the last month or so.

It was about two weeks ago when an epic battle took place. It was right at dusk, and I happened to be home and I could hear the ravens carrying on with their loud, incessant squawking. I finally decided to wander outside to see what was going on and joined a neighbor who was standing in the cul-de-sac watching the show.

Two ravens were harassing one of the owls perched in the ponderosa pine tree. The owl was holding his ground, making loud clicking sounds by snapping its beak open and closed in rapid succession. The ravens would charge the owl and quickly retreat to avoid any physical contact. This went on for a few minutes, and finally the owl had had enough. At this point another observer, attracted by the ruckus, arrived— it was an adult Cooper’s hawk.

The owl left the pine, and flew into a juniper with the ravens and the hawk in pursuit. What a show! Since that time, I’ve continued to hear one or both of the great horned owls hooting in the neighborhood (frequently during the middle of the day), but I kind of had the feeling that the ravens had successfully defended their nest and driven off the owls.

However, this past week a neighbor mentioned to me that one of the owls was sitting on the raven’s nest! I got out my spotting scope and set it up in the cul-de-sac, but I just didn’t have a good vantage point of the nest. Neighbors on the other side of the creek invited me to view the nest from their deck.

Well, that was a game-changer! From the vantage point of my neighbors’ backyard, I could see the female owl indeed sitting on the nest, so I assume she must be sitting on eggs. If this is the case, it means the owls prevailed over the ravens.

However, ravens do not give up easily. They come back — not just the pair that uses the nest each year, but others in their ‘clan,’ perhaps some of their offspring from earlier seasons. A couple of days ago a group of ravens was harassing the female on the nest, and the male flew into the ponderosa to defend his mate and to deal with them. Crisis averted — at least for now.

I have to admit, it is pretty exciting to have great horned owls nesting in my yard. Stay tuned for future updates. Until next week, happy birding!