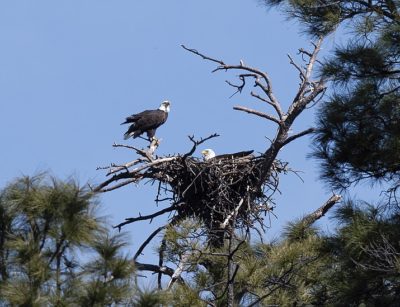 Bald Eagles are seen in their nest by Lynx Lake. (Dagny Gromer/Courtesy)

While it may be only February, it is already breeding season for some of our local wild bird species.  On a recent Jay’s Bird Barn- sponsored bird walk to Lynx Lake, we observed the nest of our only local resident pair of Bald Eagles.  On that particular day, we saw both the male and female either on the nest or flying around the area.

A large area around the nest site is closed to the public, and it is very important that the eagles do not get disturbed by humans approaching the nest.  If you want to see the nest from a distance—binoculars or a spotting scope would be helpful—the best place to view it is from the south shore, right by the boat ramp.  If you look east, you will see a large snag with a huge nest in it.  Again, do not approach the nest, as it is illegal to do so.

Other nesting bird species this time of year includes great-horned owls.  As mentioned in previous columns, this species typically lays claim to an existing nest of another species—such as a red-tailed hawk or a raven.  And just this week, I received an email from a customer with a video of a pair of roadrunners mating in his yard.

As you consider the onset of breeding activity, you may consider ways you can encourage birds to nest on your property.  It is not too early to put out nesting material such as cottontail nesting balls.  We don’t have a lot of cavity-nesting birds in Prescott, but there are some species that would appreciate a nesting box.  Cavity-nesting birds include western screech owl, American Kestrel, all woodpecker species, white breasted and pygmy nuthatches, mountain chickadees, both bridled and juniper titmice, Bewick’s wren, western bluebirds and ash-throated flycatchers.

Most bird species, such as lesser goldfinches and scrub jays, build a cup-shaped nest in the crotch of tree branches.  Some species, such as quail and towhees, nest directly on the ground, and other species, such as house sparrows, house finches, Say’s phoebes and wrens prefer to build around structures.

I am frequently asked if there is any ‘guarantee’ whether birds will use a man-made bird house.  There isn’t, but providing a nesting box increases the odds, as there are only so many natural cavities available to birds in nature.  Cavities occur when a branch breaks off from the main part of a tree creating a natural hollow.  Some bird species create cavities in the trunks of trees—such as woodpeckers and nuthatches.  Interestingly, a lot of cavity-nesting birds don’t have the right beak structure to excavate their own nesting cavity, so they rely on other species (or nature) to create these places for them.

On a different note, I would like to put in a pitch for a new show produced by the Arizona Game and Fish Department titled, “Birding Across Arizona”.  This new film has been in the works for several months, and parts of it were filmed in the Prescott area including Goldwater Lake, Watson Lake and inside Jay’s Bird Barn!  The show will air for the first time on Tuesday, March 3rd, at 7:00 p.m. on Arizona PBS, channel 8.

On Feb. 27 at 6:30 p.m. is the monthly meeting of the Prescott Audubon Society.  The meeting is held at Trinity Presbyterian Church, located at 630 Park Avenue in Prescott.  The program is titled “Walks of a Lifetime in America’s National Parks” and will be presented by Martha and Bob Manning.  The event is free and open to the public.