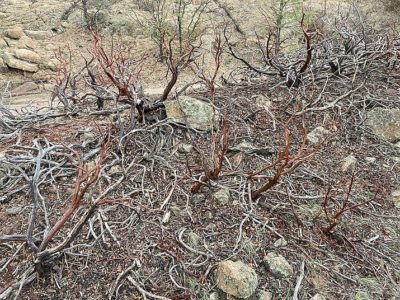 An example of the hail damage in the Dells. These manzanita shrubs lost all of their leaves as a result of the storm. (Eric Moore/Courtesy)

Our recent monsoon storm activity over the last few weeks has simply been amazing. Unfortunately, many areas in and around Prescott have experienced severe, damaging hail storms.

A friend, who lives in Granite Dells, shared a number of pictures of the devastation that occurred a little over a week ago from one of these hail storms. The pictures showed a stark landscape, devoid of vegetation. The hail storm stripped the trees, shrubs and bushes of their vegetation, smashed cacti, and broke branches. Not to mention the damage it did to homes and vehicles.

This past week I rode my bike into the Dells on the Peavine Trail, and saw the destruction for myself. The denuded landscape gave the appearance that a wildfire had gone through the area. It will be interesting to witness how this area bounces back from such a severe thrashing.

Having seen the heavy damage to all of the plants in that area, it made me wonder how the wild birds fared when the giant hail came crashing down. As I rode my bike through the area impacted by the hail storm, I saw just a few seed-eaters.

I believe insect-eating varieties of birds were affected the most by the hail storm — particularly birds that forage by “foliage gleaning.” There are many different varieties of bird species that eat insects, and there are several different foraging methods to catch insects.

For example, swallows are insect eaters and they catch insects in sustained, continuous flight — similar to the feeding behavior of bats. This feeding behavior is referred to as “aerial gleaning.”

Insect-eating varieties of birds in the flycatcher family — which includes kingbirds, phoebes and pewees — frequently perch in open, exposed areas so they can scan their surroundings for flying insects. When they see an insect, they fly out from their perch, catch the bug, then return to a high, open-exposed perch. This feeding behavior is referred to as “swoops.”

A large group of insect-eating bird species are referred to as foliage gleaners. This would include, but is not limited to, many different families of birds including titmice, chickadees, warblers, vireos, bushtits, verdins, orioles, and tanagers. Birds that fall into this classification eat insects that they find on and in the foliage of trees and shrubs.

Back to the devastation in the Dells.

The lack of foliage had an immediate impact on foliage-gleaning bird species. With no foliage, the bird species that are dependent on this method of locating their preferred food source needed to move to adjacent habitat that was not affected by the hail storm. They could not just “change” their foraging technique due to the new circumstances in which they found themselves.

Foraging behavior is both hard-wired into their biology, and is impacted by the structure of the bird. For example, while swallows are built for sustained continuous flight, a small bushtit that foliage gleans couldn’t just start flying like a swallow. It’s structure, shape and size all affect how it feeds. To adapt, it would have to move to an area where there is foliage, or it would certainly not survive.

Speaking of survival, I couldn’t also help but wonder how birds could stand a chance of surviving such a violent weather event. I am sure there was a certain amount of mortality as a result of the storm. It is not realistic to assume that all birds successfully escaped the wrath of the violet hail. As we know, nature can be both wonderful and cruel at times.

I hope you are enjoying the abundant rains as much as I am.